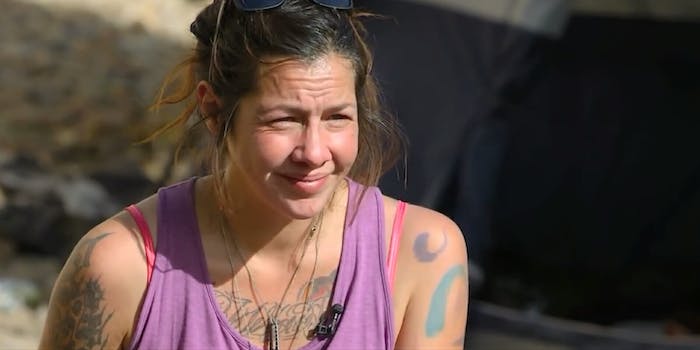 Wait, what about the homeless mother in Trump’s State of the Union address?

Trump conveniently failed to mention much about her.

President Donald Trump’s State of the Union address last night marked the official end to the president’s turbulent first year in office. While conservatives loved his speech, progressives were alarmed by his story of Hope Holets, the baby who was surrendered to a New Mexico police officer by her homeless, heroin-addicted mother. In a story filled with righteous praise for the cop, they wanted to know just what happened to Hope’s biological mother.

Officer Ryan Holets and his wife Rebecca were introduced last night as an opportunity to expand the administration’s pledge to “fight the drug epidemic and help get treatment for those in need.” To that point, Trump claimed the family is an excellent example of how “the most difficult challenges bring out the best in America.”

However, instead of helping the homeless mother find a proper home for her child through government assistance, Trump said that the police officer “felt God speak to him,” urging him to adopt the pregnant woman’s child in order to protect the unborn baby from her mother’s heroin addiction. The mother and her partner agreed to let the Holets adopt the child, who they named Hope, once she was born.

“Ryan and Rebecca, you embody the goodness of our nation,” Trump remarked. “Thank you.”

Here’s the problem with Trump’s telling of that story: The focus was entirely on Ryan Holets’ heroism and not helping the woman who felt her only choice was to give up her child.

The baby’s biological mother, Crystal Champ, is still struggling with addiction along with her partner, Tom Key, according to CNN. Originally, Champ was deeply offended when Ryan first confronted her, because she felt they “had no idea how hard this is,” she told CNN. But the two have since bonded, to the point where Ryan has set up a GoFundMe for Champ and Key, with the hope of providing them housing and medical support after entering a live-in rehabilitation center. As of Wednesday morning, the couple is less than $600 away from their goal.

But Trump’s retelling points to a larger problem in which the Republican Party glorifies unborn children and couldn’t care less about their mothers. As Slate’s Christina Cauterucci puts it, the power disparity between a police officer confronting a heroin addict over custody for her unborn child represents “some degree of coercion,” and that the story itself “treats women as mere tools of reproduction.”

“A progressive politician might have invoked Hope Holets to illustrate our need for a humane drug policy, better addiction treatment, more affordable housing, or better access to contraception and maternal health care,” Cauterucci wrote. “To Republicans, Hope Holets’ biological mother is merely the villain in the story of a heroic cop.”

That’s not to say the Holets family didn’t save Hope’s life. And the Holets certainly seem invested in helping Champ and Key go to rehab. But there are more layers to Ryan and Rebecca Holets’ story than President Trump is willing to admit. Without talking about the baby’s mother, and the conditions that got her to living on the street and using heroin, there’s never going to be an honest discussion about the roles gender and poverty play in America’s growing opioid crisis.