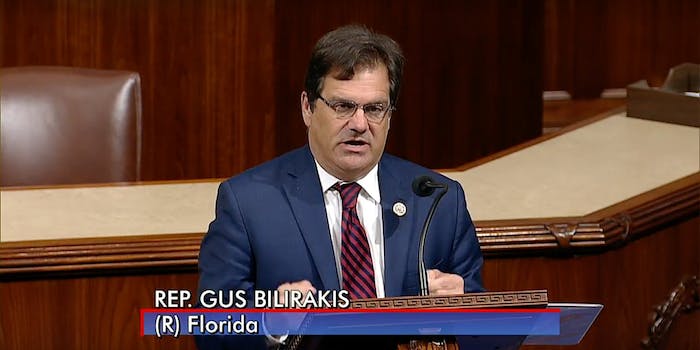 Florida Republican is hosting a women’s summit with topics on gardening, weight loss

How patronizing is this?

Florida Republican Gus Bilirakis plans to hold his inaugural Women’s Summit on June 9 that he’s marketing as “an opportunity for women to learn about relevant topics that have a direct impact on their lives,” according to the Tampa Bay Times.

Those relevant topics that the U.S. House of Representatives member believes impacts every woman include “maintaining a healthy weight and promoting wellness,” “community gardening,” and “maximizing social media presence,” according to the event flyer.

Sure, there are also sessions that cover getting involved with the government and community health resources, but quite a few folks on Twitter are scratching their heads.

Yes, because gardening & weight loss are two of the most pressing issues facing women. Not access to birth control, pre/post natal care, #MeToo, wages, poverty, etc. I hope public $$ isn’t being spent on this because it’s a disservice to women & taxpayers. https://t.co/WmObS4XoJN

No coupon clipping??->Bilirakis to host his first ever Women’s Summit. Topics like ‘gardening’ and ‘weight loss’ are on the agenda. @TB_Times https://t.co/eZxB0GxVqB via @TroMcManus

I hope they also cover nail art, how to get perfect beachy waves, and also Gus Bilirakis you are terrible https://t.co/VUFC6R3O9J

Rep. Bilirakis!!! This wasn't what we meant when we talked about the pink wave!!!!!! pic.twitter.com/XnzsGgxAZn

Bilirakis told the Tampa Bay Times that he curated the summit’s sessions based on ideas generated by attendees of a “women’s stakeholder session” he hosted in Lutz, Florida in 2014. (He apparently hasn’t talked to any female constituents in four years.)

“I try very hard to allow ideas and agendas to be driven by the people I serve,” Bilirakis said. “I’ve always said the best ideas come from the people.”

Critics from Think Progress and Twitter couldn’t help but notice there are a few key issues affecting women that aren’t on the agenda. Namely, discussion of the Violence Against Women Act (VAWA), which he opposed in a reauthorization vote in 2013 because he said it diverted too much domestic violence programs funding to sexual assault programs without explanation. He also doesn’t plan to talk about the gender pay gap—which is probably because Bilirakis voted against the Lily Ledbetter Fair Pay Act in 2009.

Chris Hunter, the leading Democrat running against Bilirakis for his spot in the House this year, called the summit “a shameless election year stunt,” given Bilirakis’ record on women’s issues.

“He uses his Congressional power to vote against women and then hosts a summit that patronizes women,” Hunter wrote on Twitter.

Robert Tager, a criminal defense attorney running as a Democrat, wrote on Facebook that it’s pathetic Bilirakis “now wants to act like he recognizes women as humans.”

Bilirakis has also voted with President Donald Trump’s positions on the issues 97.4% of the time, according to FiveThirtyEight, including the repealment of the Affordable Care Act, the banning of abortions after 20 weeks of pregnancy, and denying funds to health centers that perform abortions.