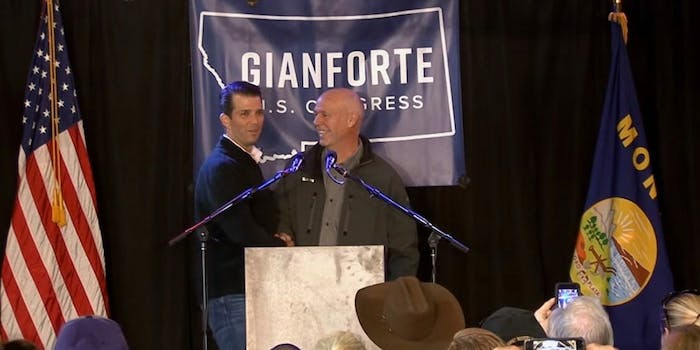 Luckily, there are plenty of people who want to make sure Jacobs can actually see when he reports on whether Gianforte, the candidate for Montana’s House of Representatives seat, will win Thursday’s special election. (He probably will, by the way).

In fact, some people want Jacobs’ vision to be so perfect that they’re willing to contribute to a GoFundMe to get him new specs. Which now won’t be necessary, because Warby Parker tweeted Thursday that it would hook him up with new glasses.

We're on it! Stay tuned for a DM from us, @Bencjacobs. cc @samtayrey

100%—we've reached out to Ben, and hope to hear back from him soon!

It’s unclear if Jacobs has used Warby Parker before, and we don’t know if he’s actually responded to the online eyeglasses vendor. But if he chooses to go in another direction, he could have the money to make it happen.

A GoFundMe page titled simply “Help Ben Jacobs Buy New Glasses” was created Thursday morning, and after about eight hours it had raised more than $1,600.

I, uh… I… tripped while trying to tweet mean shit at Ted Cruz, can someone give me $3,000 for bandaids pic.twitter.com/WSGME5v1S4

The page’s creator has since said that, after reaching the initial goal, they would donate the rest of the proceeds to the Committee to Protect Journalists. But there are other ways to help. As one journalist tweeted, if you’re in the mood to be charitable, maybe you should support Jacobs’ publication and others like it.

Either way, hopefully Jacobs’ next pair of glasses will be solid enough to survive any unexpected pro wrestling moves. Because it’s hard say “DEAL WITH IT” when your glasses keep falling apart.