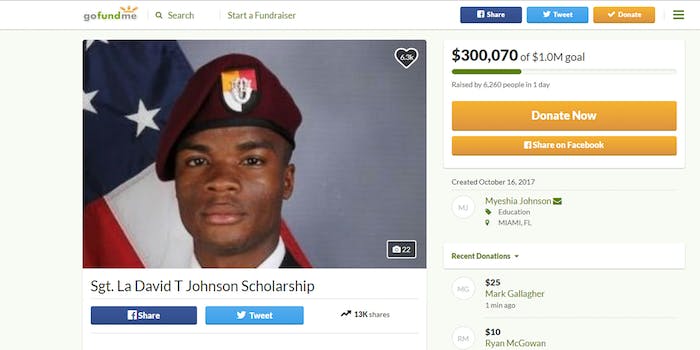 The money will be used for his children's education.

A GoFundMe set up to collect money for the children of Sgt. La David T. Johnson, who was killed in Niger earlier this month, has surged online over the past 24 hours to raise more than $300,000.

Johnson, 25, was killed along with several other soldiers when they were ambushed by militants affiliated with the so-called Islamic State, according to Pentagon officials. The money collected will go toward creating a scholarship for his children’s college education, according to the page.

On Tuesday, Rep. Frederica Wilson (D-Fla.) said she overheard President Donald Trump tell Johnson’s widow that her late husband “knew what he signed up for” during a phone call. Trump denied that congresswoman’s claims, saying Wilson “fabricated” what he said, while the lawmaker stands by her account of the phone call.

Johnson’s mother, Cowanda Jones-Johnson, on Wednesday morning confirmed to the Washington Post Wilson’s account of the call with Trump. “President Trump did disrespect my son and my daughter and also me and my husband,” she said.

Several people who donated said they were grateful for Johnson’s service and called him a “hero” and “patriot.”

The GoFundMe surpassed its original goal within hours.

Last night I was hoping to raise $5,000 for a scholarship fund for #SgtLaDavidJohnson’s kids.

The fund was set up by Wilson’s 5,000 Role Models of Excellence Program, which aims to “intervene in the lives of at-risk boys in order to provide them with alternatives that will lead them away from a life of crime and violence,” according to the organization’s Facebook page.

Johnson was part of the program when he was younger, CBS reported.

Update 10:10am CT, Oct. 18: Added comment from Johnson’s mother regarding the phone call with Trump.