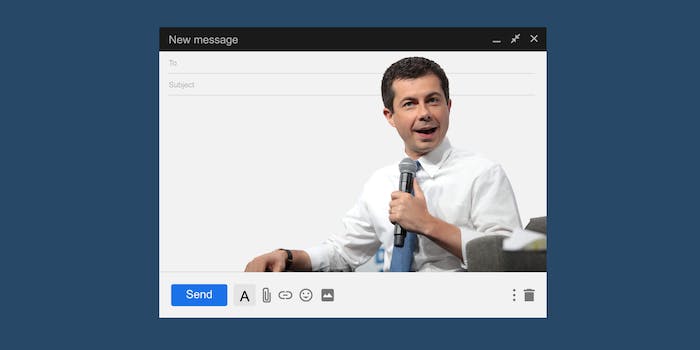 Pete Buttigieg's emails seem to land in the 'primary' inbox more often, according to a new report.

Campaign emails from Pete Buttigieg are more likely to be put into someone’s “primary” inbox on Gmail than other 2020 Democrats, according to a new report.

The Markup created a new Gmail account and studied where emails from 2020 Democrats ended up: in the account’s “primary,” “promotions,” or “spam” inboxes.

Similarly, former vice president Joe Biden’s campaign sent 91 emails, with none of them making their way into the “primary” inbox, and 86% being sent into the “promotions” one.

Sen. Amy Klobuchar (D-Minn.) had 1% of her 312 emails show up in the “primary” inbox, and Sen. Elizabeth Warren (D-Mass.) had zero percent show up in that inbox.

The Markup used a new Gmail account, set up using Tor, the anonymous browser, and signed up for 16 mailing lists for 2020 Democrats, President Donald Trump, and Republican challengers like Joe Walsh and Bill Weld. The account also signed up for emails from competitive congressional candidates, nonprofits, and advocacy groups.

The account received more than 5,000 emails from October last year to Feb. 12.

You can read all the Markup report here.