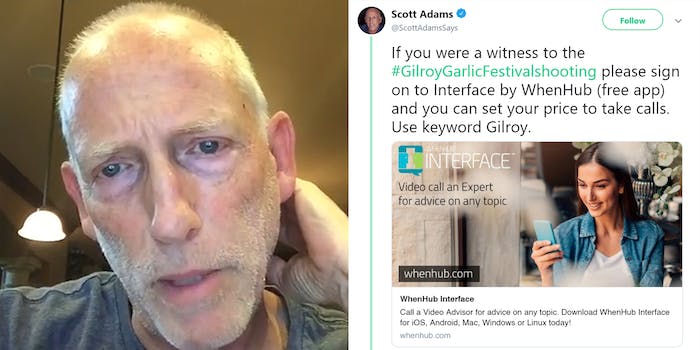 Why did he plug his app after a mass shooting?

Last night, at the Gilroy Garlic Festival in Northern California, a gunman opened fire, killing three and wounding 12. The gunman was killed on the scene by police, but authorities are still searching for a possible second suspect.

The shooting quickly caught tracking on social media, with people sharing information from the shooting, videos from the scene, and their thoughts and prayers.

One person who posted about the killings was Dilbert creator Scott Adams.

If you were a witness to the #GilroyGarlicFestivalshooting please sign on to Interface by WhenHub (free app) and you can set your price to take calls. Use keyword Gilroy. https://t.co/ilASD9kVAt

“If you were a witness to the #GilroyGarlicFestivalshooting please sign on to Interface by WhenHub (free app) and you can set your price to take calls. Use keyword Gilroy,” Adams wrote.

WhenHub is Scott Adams’ app; he describes himself as chief strategy officer on Twitter. It appears to be a video interface chat which users can sign on to and request compensation from as an “adviser.”

Naturally, in the wake of a mass shooting, “use keyword Gilroy” read like a podcast promo, and Adams, who was apparently using a mass shooting as a way to increase subscribers to his product, earned some ire.

Well that's one way to respond to the Gilroy shooting…

Hard to imagine tweeting this.

Adams defended himself, saying the app was just for newsgathering, calling the outrage “Fake.”

It’s a news gathering tool, like CNN and FOXNEws (among other uses). No fake outrage necessary. This is one of its intended purposes.

While it could possibly have newsgathering value, it’s still a product Adams owns and tried to profit from in the wake of a mass shooting.