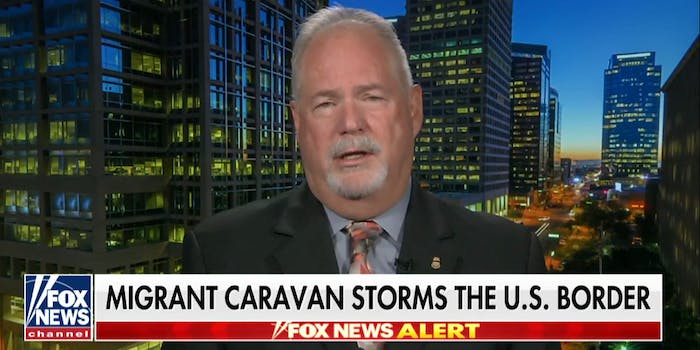 Ron Colburn said that the use of pepper spray against members of the migrant caravan was warranted.

In an appearance on Fox & Friends on Monday, former U.S. Border Patrol deputy chief Ron Colburn commented on the use of chemical deterrents against refugees and migrants coming to the border, saying that the chemicals are so “natural” that “you could put it on your nachos.”

Colburn, whose LinkedIn profile lists him as working at Command Group, a security consulting firm, and as president of the Border Patrol Foundation, spoke with host Steve Doocy about the Border Patrol’s use of tear gas on the group of refugees and migrants approaching the southern border at Tijuana. The caravan includes children, which Doocy pointed out earlier in the show.

“There was a small hole they were able to puncture through the border wall and they hurled all sorts of rocks, et cetera, at the border patrol agents, and then they fired the tear gas. Is that warranted,” asked Doocy.

“Absolutely. And to clarify, the type of deterrent being used is OC pepper spray. It’s literally water, pepper, with a small amount of alcohol for evaporation purposes. It’s natural, you could actually put it on your nachos and eat it.”

The caravan is made up of refugees and migrants from Latin America; using the word “nachos” seems to be a jab at the ethnicity of the migrants.

The Daily Dot has reached out to Colburn and Fox for clarification on Colburn’s comments, but neither responded by press time.

Colburn also claimed that the caravan was “particularly violent” and “supported from outside sources” without citing further evidence or extrapolating. President Donald Trump has bought into the theory that the caravan is funded by Jewish billionaire George Soros.

Trump has repeatedly threatened to close the southern border; the San Ysidro section of the border, where agents lobbed pepper spray at members of the caravan, was closed to pedestrians.

The use of pepper spray is regulated in many states. It affects the body’s mucous membranes and causes breathing difficulties. While the effects are not permanent, they may last for two hours.

You can watch the interview here.