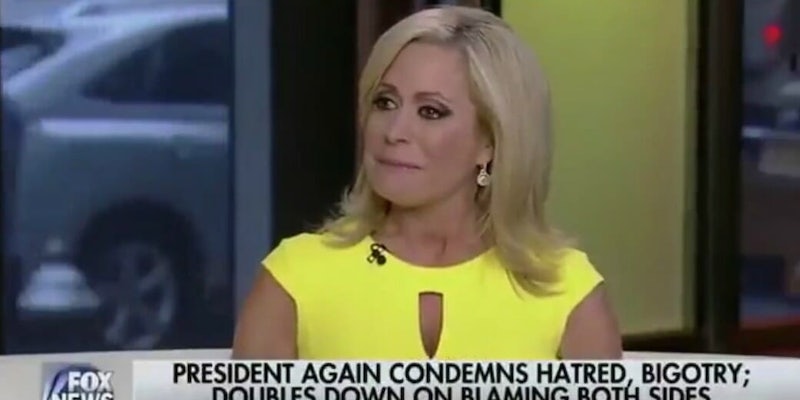 She said she was uncomfortable having this conversation.

When President Donald Trump blamed both sides for the violence in Charlottesville, Virginia, and said that there were “very fine people” among the white supremacist groups in attendance, he was immediately lambasted by everyone from corporate leaders to Ivanka Trump’s rabbi.

But Fox News co-host Melissa Francis can’t understand why people are judging her for defending the president. On Wednesday on Outnumbered, she argued that Trump never said “equal blame,” nor did he call neo-Nazis good people, and then suddenly broke down in tears. “I know what’s in my heart and I know that I don’t think anyone is different, better or worse based on the color of their skin,” she said, her voice cracking. “But I feel like there is nothing any of us can say right now without being judged.”

Before Francis began to cry, co-hosts Juan Williams and Marie Harf said Trump’s statements suggested he was defending Nazis and other white supremacists.

“I don’t think both sides have blame,” Williams said. “If you’re a patriot and you show up to stand up for American values and say that it is wrong to be racist and to stand outside a synagogue with automatic machine guns and scare the Jewish people inside.”

Here’s how Francis responded and how co-host Harris Faulkner attempted to comfort her by using an awfully familiar phrase from Trump’s presidential predecessor: