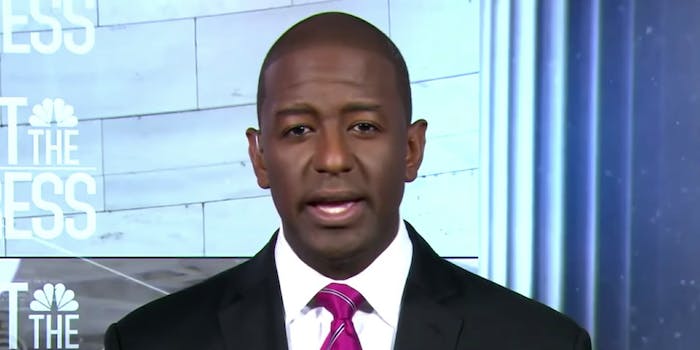 A white supremacy group is placing racist robocalls that attack Democrat Andrew Gillum, the first Black candidate for governor to be nominated by either party for state office in Florida.

The New York Times obtained the audio from a one-minute robocall placed last week. In the call, a voice imitating minstrel performers claimed to be Gillum over drum and monkey sounds. “Well, hello there,” it starts. “I is Andrew Gillum.”

“We Negroes … done made mud huts while white folk waste a bunch of time making their home out of wood an’ stone,” it continued, according to the Washington Post.

The phone campaign also asked for votes and discussed the policing of Black people. It ended with a statement that it was funded by Road to Power, a white supremacist and anti-Semitic group that runs a “right-wing extremist website” from Idaho.

A spokesperson for Gillum, who’s currently the mayor of Tallahassee, said in a statement to the Post that the call is “reprehensible” and “could only have come from someone with intentions to fuel hatred and seek publicity.”

“Please don’t give it undeserved attention,” the spokesperson said.

Gillum said in an interview with CNN’s State of the Union on Sunday that he is fighting efforts to “racialize and, frankly, weaponize” the race for governor’s office.

"I want to make sure that we don't racialize, and, frankly, weaponize, race as a part of this process," says Florida governor candidate Andrew Gillum, after he is targeted by racist robocalls https://t.co/VjK3V9lGxO #CNNSOTU pic.twitter.com/hOGfuw2m8O

Gov. Rick Scott (R) tweeted on Friday that “there is no room for any racial politics here in Florida—none.”

There is no room for any racial politics here in Florida – none. Florida is a melting pot of people from all over the globe, and we are proud of it. No attempts to divide people by race or ethnicity will be tolerated, from anyone. THIS. STOPS. NOW. https://t.co/LX72MvP89P

Last week, Rep. Ron DeSantis (R-Fla.), who’s running against Gillum in Florida’s election for governor, defended his racist statement that the Black candidate would “monkey things up” if he were elected.

A spokesperson for the DeSantis campaign called the racist robocall targeting his opponent “appalling and disgusting.”