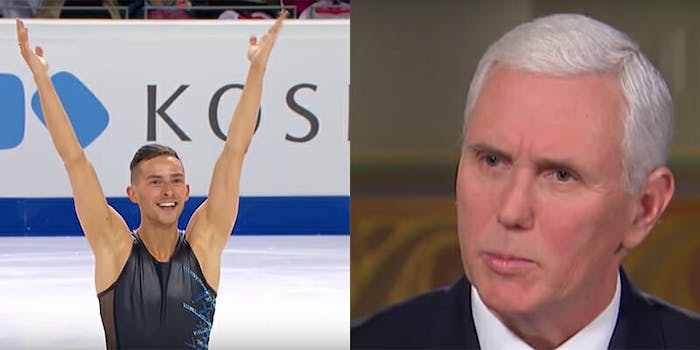 'Mike Pence doesn’t stand for anything that I really believe in.'

USA Today reported Wednesday that two people with knowledge of the situation said Rippon turned down an offer of a meeting with Pence, who asked the U.S. Olympic Committee to set up the conversation.

Pence is leading the official U.S. delegation to the 2018 Winter Olympics opening ceremony on Friday in Pyeongchang, South Korea. In a Jan. 17 story in USA Today, Rippon had criticized the vice president for his reported support of LGBTQ “conversion therapy.”

According to Snopes, Pence has never publicly advocated for LGBTQ conversion therapy. But during his campaign for Congress, his website said he supported the use of federal funding to treat people “seeking to change their sexual behavior.”

Following Rippon’s remarks, Pence scrambled to set up a meeting with the Olympian, and Pence’s press secretary issued a rebuttal saying Rippon’s comment “has no basis in fact.”

“The vice president will be enthusiastically supporting all the U.S. athletes competing next month in Pyeongchang,” press secretary Alyssa Farah said.

Rippon insisted that he’s “not trying to pick a fight with the vice president of the United States” and reportedly said that he would consider meeting Pence after he’s finished competing in the Olympics.

“If I had the chance to meet him afterwards, after I’m finished competing, there might be a possibility to have an open conversation,” Rippon said last month. “But I don’t think the current administration represents the values that I was taught growing up. Mike Pence doesn’t stand for anything that I really believe in.”

Rippon had said he’d rather not meet with Pence during the meet-and-greet between the official delegation and U.S. Olympians ahead of the opening ceremony.

“If it were before my event, I would absolutely not go out of my way to meet somebody who I felt has gone out of their way to not only show that they aren’t a friend of a gay person but that they think that they’re sick,” he said.

Rippon, 28, is the first openly gay U.S. man to qualify for the Winter Olympics, according to the Huffington Post.