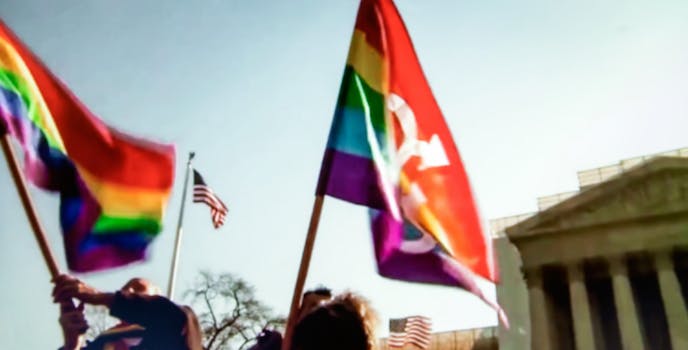 Calling the fallout of anti-LGBTQ bills 'fake news' is exactly the wrong response.

House Bill 2 is the disaster that just won’t die.

Negotiations over the North Carolina bill, passed by former Gov. Pat McCrory last March, have reached a point of no return in the embattled state. Legislators in the General Assembly have less than 48 hours to meet a deadline set by the NCAA that would block the state from hosting all championships through 2022 if the bill, which forces trans people to use the bathroom that corresponds to what’s listed on their birth certificate, isn’t repealed. The NBA has already announced that the state would be ineligible as a potential site for the All-Star Game as long as H.B. 2 remains the law of the land.

A recent estimate from the Associated Press testified to the massive impact these HB 2 boycotts will have on the state: In the next 12 years, North Carolina stands to lose over $3.76 billion over the anti-LGBTQ legislation.

It’s a sign of how bad things have gotten in the Tar Heel State that after that AP report was released, the state’s highest-ranking Republican politician, Dan Forrest, decided to have what Trump is having. He claimed that the findings were nothing more than fake news. In a statement, the lieutenant governor argued that the study had “no basis in fact and is another attempt to mislead the public.” Calling it a “sad comment on our media,” Forrest further alleged that the numbers were “inflated, manipulated, and contrary to any empirical evidence.”

Ironically enough, the AP report actually erred on the side of caution in making its determination on H.B. 2’s economic impact.

The tabulation, which the AP says “only data obtained from businesses and state or local officials regarding projects that canceled or relocated because of HB2,” is “likely an underestimation of the law’s true costs.” For instance, a Lionsgate production that pulled out of the state in protest of the discriminatory law wasn’t counted because its financial ramifications weren’t entirely clear.

It’s particularly sad that Republicans in the state would rather blame so-called “media bias” for drawing attention to the bill’s ramifications than do anything meaningful to stop it. This week, conservative lawmakers claimed that they had reached a compromise with Democratic Gov. Roy Cooper, who was voted in over McCrory in November. The governor’s office, though, claimed that a deal hadn’t been approved by Cooper, who was concerned about a “religious liberty” clause in the most recent version of the bill.

A draft of the bill leaked last week would allow North Carolina citizens to sue the state government if they felt that their deeply held religious faith is “burdened or likely to be burdened.” Although this is intended to “protect the rights of conscience” of state residents, advocacy groups like the American Civil Liberties Union and Lambda Legal warn that it would allow businesses and private individuals to discriminate against members of the LGBTQ community.

A similar law passed in 2015 by former Indiana Gov. Mike Pence, who is now our vice president, would have allowed employers to fire people based on their gender identity or sexual orientation. This “right to discriminate” legislation would permit a doctor to deny services to transgender patients or a landlord to deny a lesbian couple’s housing application just because of who they are.

If Republican lawmakers hope that aping Indiana’s law will appease the NCAA, they’re in for a giant bucket of ice water over the head. The RFRA law was “fixed” after estimated losses of $60 million in potential revenue due to widespread boycotts, with at least a dozen conferences pulling out of the state in response to the bill.

Rather than meeting their opponents in the middle in hopes of passing a meaningful repeal bill, North Carolina conservatives have only moved further to the right as the clock winds down.

Earlier this month, Republican legislators introduced House Bill 186, a piece of legislation that was worse in many ways than the one that came before it. Under the proposed law, only the state of North Carolina would be allowed to set the policies for bathrooms at private businesses (e.g., a movie theater), but localities would be allowed to determine their own inclusions for buildings owned by the state (e.g., city parks and schools).

Given that many of the same lawmakers who passed H.B. 2 are still in the General Assembly, that policy would keep H.B. 2 in effect across the state.

What is perhaps even worse than that provision in HB 186 is one that would permit voters in local municipalities to put civil rights up for a vote any time a City Council passes an ordinance in support of trans people. The proposed bill dramatically lowered the bar for introducing a ballot referendum across the state, which didn’t go very well for Houston. Two years ago, the city’s Equal Rights Ordinance was struck down by voters following a campaign alleging that trans-inclusive bathroom policies would be a free pass for sexual predators.

If groups like the NCAA and NBA are turning up the heat in North Carolina, there’s a reason that conservatives aren’t jumping out of a pot that’s already boiling over: They would rather put partisanship over doing what’s best for their state.

Dismissing the real and lasting impacts of legalizing discrimination isn’t solely a Tar Heel problem. Business leaders in Texas have warned that passing Senate Bill 6, a bathroom bill that’s identical to HB 2, would do enormous damage to the state; one estimate suggested it would cost the Lone Star State between $964 million to $8.5 billion.

PolitiFact has suggested that figure is probably an overestimation, but there’s no doubt S.B. 6’s impact would be tremendous. In fact, Texas is already gearing up for a repeat of last year’s backlash over H.B. 2. If the anti-LGBTQ bill passes, the Super Bowl has claimed the state could lose out on playing host to future games, which inject millions of dollars into local economies. Reports suggested that when the NBA elected to pull the All-Star Game from Charlotte, which was scheduled to be held in the North Carolina city in February, local businesses lost out on $100 million in tourism.

Nonetheless, Texas Lt. Gov. Dan Patrick—who is a vocal supporter of SB 6—has claimed that there’s “no evidence whatsoever” that Texas will repeat the fiasco in North Carolina. Instead of backing off anti-LGBTQ legislation, the state has introduced 17 laws targeting queer and transgender people.

The news that targeting vulnerable minorities hurts local economies, however, is far from fake. It’s also not new.

After Arizona voters gave the thumbs down to a 1990 ballot measure which would have recognized Martin Luther King Day as a state holiday—as it is in all other 48 states—the NFL pulled the Super Bowl from Tempe. Losing that game, which was scheduled to be held at Sun Devils Stadium in 1993, cost Arizona $100 million. An extreme anti-immigration bill passed by Gov. Jan Brewer in 2010 caused the state a reported $140 million in potential revenue from conventions deciding to move their business elsewhere.

So, when Brewer had the chance to sign a “religious freedom” law in 2012, she passed on the opportunity. The Republican vetoed the bill.

If Forrest and Patrick are unwilling to listen to their colleagues across the aisle about the economic harm of discrimination, they should listen to fellow members of their party. Govs. Dennis Daugaard of South Dakota and Nathan Deal of Georgia both nixed anti-LGBTQ bills in their states last year, and even Joe Straus, the Texas Speaker of the House, has warned against legalizing hate. Straus called the state’s bathroom bill “manufactured and unnecessary.”

Unfortunately, Straus remains a minority in his party—as Republicans keep moving the goalposts so far that even discrimination looks like a reasonable solution. After negotiations stalled over the leaked draft of North Carolina’s repeal, politicians announced Wednesday night that they’ve reached an agreement. But that deal actually enshrines into the law the bigotry it’s supposed to eradicate. The deal would continue to block cities from passing their own protections for the LGBTQ community, while allowing the state to set North Carolina’s bathroom policies. H.B. 2 would be gone in name, but things would stay exactly the same.

The quagmire in North Carolina, though, is more than a shame. This disaster will continue to contribute to an environment where transgender people are stigmatized, targeted, and harassed just for doing something as small as going the restroom.

Should Texas and North Carolina continue to press forward with targeting the LGBTQ community, Republican lawmakers shouldn’t point the finger at “fake news” when their states lose jobs and money over doubling down on hate. They only have themselves to blame.

Update 11am CT, March 30: North Carolina lawmakers have reached an agreement on H.B. This article has been updated to reflect this development.