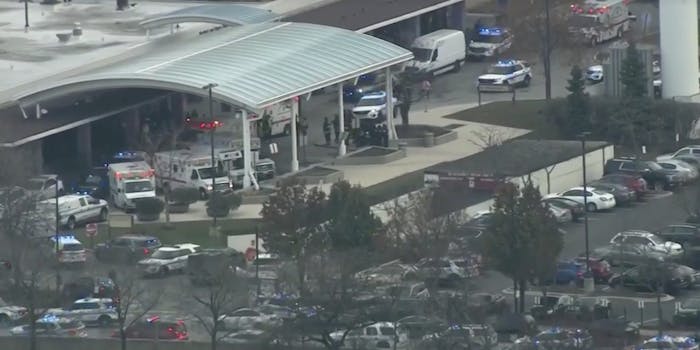 'So this is horrifying.'

As a fatal shooting took place at Mercy Hospital and Medical Center in Chicago on Monday, news outlets’ Facebook livestreams were populated with suggested comments including “this is so sad” and the prayer hands emoji.

Three people, including a police officer, were killed in the hospital shooting, CNN reports. The gunman was also killed.

As news of the active shooting broke, NBC journalist Steph Haberman pointed out on her personal Twitter account that Facebook had added the suggested comments feature to news outlets’ livestreams.

“So I’m just noticing that Facebook has a thoughts and prayers autoresponder on our Chicago Hospital shooting livestream and I have some thoughts,” Haberman wrote.

So I’m just noticing that Facebook has a thoughts and prayers autoresponder on our Chicago Hospital shooting livestream and I have thoughts pic.twitter.com/8LQULnbQty

A click on the arrow in the bottom-right revealed more options for auto-responses, including “Hope everyone is OK,” “What happened?” “So sad,” “So sorry,” an as some of the responses. The prayer emoji and crying face emoji were also given as options.

“This wins for the most dystopian thing I’ve seen all day,” one person wrote.

This wins for most dystopian thing I've seen all day (and I live in the smoke-drenched Bay Area where everyone is wearing masks, so that's saying a lot)

Yeah we live in Hell world

“They might also want to add an ‘I really don’t care, do you?’ one as well,” another person wrote, referencing a jacket worn by first lady Melania Trump.

They've got everything but a "whomp, whomp" autoresponder. They might also want to add an "I really don't care, do you?" one as well.

Some wrote the auto-responses as a response to the tweet, mocking Facebook’s feature.

this is so sad

Facebook did not immediately respond to the Daily Dot’s request for comment on the auto-response feature and when it was implemented for crisis situations.

Politicians have been criticized for saying “thoughts and prayers” to express their condolences whenever there is a mass shooting in the U.S., according to CNN. However, critics of #ThoughtsAndPrayers point out these words mean nothing when there has been no progress on gun control legislation. The phrase has been turned into a scathing meme and an ironic video game that asks players to prevent mass shootings by pressing “Pray” and “Think” buttons.

Some people on Twitter sarcastically asked President Donald Trump to send “thoughts and prayers” for victims of the Chicago shooting.

.@realDonaldTrump Please send us yours and the GOP’s thoughts and prayers so we can avoid talking about gun control. pic.twitter.com/zaWQqx5tnt

thoughts and prayers are NOT enough @realDonaldTrump !!! it’s been TWELVE DAYS since the last mass shooting! the us has more guns than we have people!! we have a higher rate of gun violence than any other developed country! make america great again? make america safe again!! https://t.co/94IV2XYqYr

@realDonaldTrump Should've done it before some lunatic started shooting up a hospital, you fucking dickhead. But, thoughts and prayers etc https://t.co/fWRfYunik3

Update 4:23pm CT, Nov. 20: A Facebook spokesperson told the Daily Dot in a statement that the suggested comment feature has been removed from livestreams.

“We have been testing a suggested comment feature on Live videos. Clearly this wasn’t implemented properly and we have disabled this feature for now,” the spokesperson said.