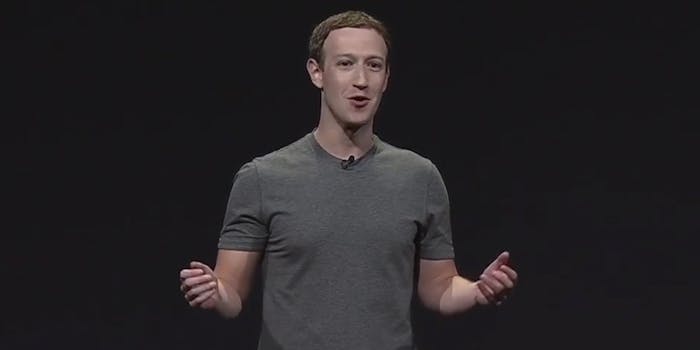 The move comes just one day before Mark Zuckerberg is scheduled to testify before Congress.

The move comes as Zuckerberg is set to testify before Congress this week in the wake of the discovery that Cambridge Analytica, a data firm that worked for Donald Trump’s presidential campaign, harvested information on 87 million Facebook users. Facebook was also used by Russia to stir discord ahead of the 2016 election.

“The goal is both to get the ideas of leading academics on how to address these issues as well as to hold us accountable for making sure we protect the integrity of these elections on Facebook,” he wrote, later adding: “Looking back, it’s clear we were too slow identifying election interference in 2016, and we need to do better in future elections.”

Zuckerberg said the commission will be made up of “academic experts” who will come up with research topics and Facebook will give them “access to our resources so they can draw unbiased conclusions about Facebook’s role in elections.”

In a separate post, the company said the commission will “enable Facebook to learn from the advice and analysis of outside experts so we can make better decisions—and faster progress.”

The announcement comes just one day before Zuckerberg is scheduled to speak before Congress to testify about the “company’s use and protection of user data” after the Cambridge Analytica revelation.

Sen. Ron Wyden (D-Ore.) said late last week that Facebook is “going to have a couple of very unpleasant days” before Congress on Tuesday and Wednesday.

The social media giant also came under fire last year as lawmakers investigated Russia’s interference in the 2016 election. The company reportedly sold more than $100,000 worth of ads to the Internet Research Agency, a Russian “troll farm” that was at the center of a recent indictment by Special Counsel Robert Mueller.