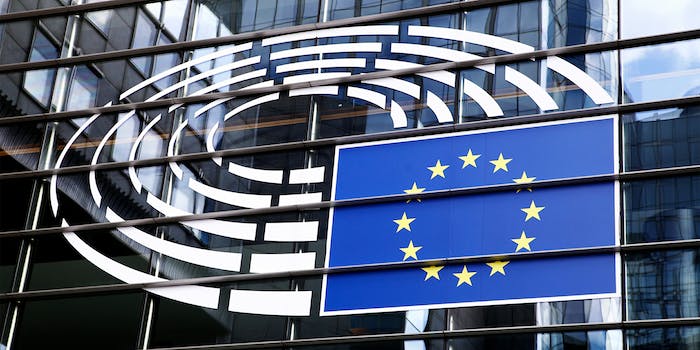 Today, the European Parliament officially adopted the Copyright Directive, including the controversial Article 11 and Article 13, both intended to protect content creators.

The Copyright Directive is the European Parliament’s legislative roadmap for how to bring their internet copyright laws, which were passed in 2001, up to date. Now that it has passed, EP members, the European Commission of the EU, and the European Council will have a “trialogue” to further tweak and negotiate the Directive. EU member states will then decide how they will implement the new legislation.

The Directive passed after being voted down in a July session of the European Parliament.

Articles 11 and 13 are also referred to as the “link tax” and the “upload filter.” The link tax would require large internet companies like Google to pay media companies when they link to their material. The “upload filer” would make them potentially sift through every piece of content uploaded on their platform to remove copyrighted material.

Critics say that the Articles intrude on the freedom of the internet, restricting the flow of content. But today also represents a victory for creators, especially smaller ones, who for years have had their material shared ad infinitum, without payment and, on occasion, without credit.

For example, under Article 13, using things like stills from movies or TV could be impossible; so would creating memes from those images. Pirated music uploads to YouTube wouldn’t happen, because content that was used without a copyright or licensing agreement of some sort would have to be blocked. A large chunk of the culture we engage with on the internet just couldn’t exist under the new rules.

Sites like YouTube use automated services to sift through content and look for copyright infringements, but those services are shockingly expensive and don’t always get it right.

Article 11 could seriously affect the way information is shared online. Even small sentence fragments or snippets of written information could be subject to a licensing agreement, making, for example, linking to information in a news report an expensive nightmare.

There are exceptions to these rules for smaller businesses, and for online encyclopedias.

The Copyright Directive was proposed as an update for to the current “Wild West” of the internet, to safeguard creators and ensure proper credit. But critics, including Tim Berners-Lee, the creator of the World Wide Web, argue that it could dramatically change—even destroy—the internet as we know it. A June letter from the Electronic Frontier Foundation to the President of the EU, Antonio Tajani, claimed that while the legislation was proposed in good faith, the potential for overreach and “control” of the internet too great under the proposed directive.

The directive was first proposed in September 2016. Discussions among the legislators to formally implement the Directive through legislation can now begin.

A statement from Vice-President for the Digital Single Market Andrus Ansip and Commissioner for Digital Economy and Society Mariya Gabriel welcomed the passage of the Directive:

“Our aim for this reform is to bring tangible benefits for EU citizens, researchers, educators, writers, artists, press and cultural heritage institutions and to open up the potential for more creativity and content by clarifying the rules and making them fit for the digital world. At the same time, we aim to safeguard free speech and ensure that online platforms—including 7,000 European online platforms—can develop new and innovative offers and business models.”

“The Commission stands ready to start working with the European Parliament and the Council of the EU, so that the directive can be approved as soon as possible, ideally by the end of 2018.”