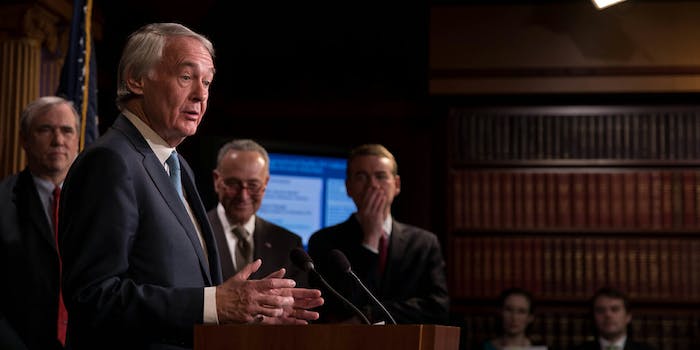 The bill aims to help protect consumers with data protection.

Sen. Edward Markey (D-Mass.) announced on Friday that he has introduced a “privacy bill of rights” bill that aims to help with consumer data protection.

The bill, the Privacy Bill Of Rights Act, would create rules that stop companies from using American’s information in discriminatory ways and would require companies to “protect and secure” personal information they have, according to Markey.

It also aims to make sure companies only collect personal information on consumers to provide specific requested services.

“America’s laws have failed to keep pace with the unprecedented use of consumers’ data and the consistent cadence of breaches and privacy invasions that plague our economy and society,” Markey said in a statement. “I have long advocated for privacy protections that include the principles of knowledge, notice and the right to say ‘no’ to companies that want our information. But it is increasingly clear that a true 21st-century comprehensive privacy bill must do more than simply enshrine notice and consent standards.”

The Privacy Bill of Rights Act would also allow for Americans to bring a “private right of action” to bring lawsuits against companies that violate the bill’s rules.

As the Electronic Frontier Foundation notes, the private right of action gives a law like Markey’s “bite.”

It is not enough for government to pass laws that protect consumers from corporations that harvest and monetize their personal data. It is also necessary for these laws to have bite, to ensure companies do not ignore them. The best way to do so is to empower ordinary consumers to bring their own lawsuits against the companies that violate their privacy rights. Such ‘private rights of action’ are among EFF’s highest priorities in any data privacy legislation.

Markey said the bill was crafted in response to the continuing number of data breaches and “revelations about myriad companies sharing consumers’ personal information without their consent.”

“Senator Markey’s bill will help enable people to use the internet without fear of exploitation or discrimination from companies intent on mining their private data,” Free Press Action Policy Counsel Gaurav Laroia said in a statement. “People must have the right to safely choose who they give their personal information to and need enforceable rules over how it can be used.”