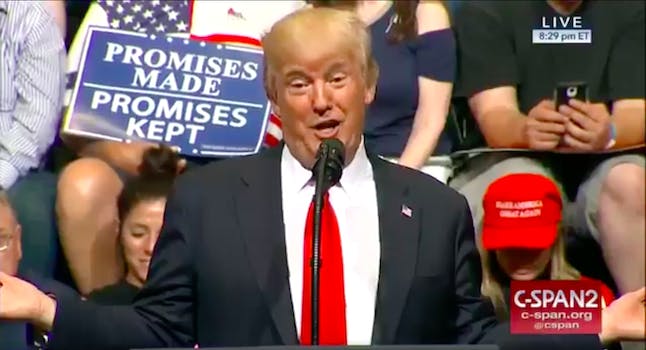 Trump said if people insisted, he would nominate a poor person.

In advance of the Senate finally unveiling its long-withheld healthcare bill, a plan to reshape one-sixth of the American economy centered around the president’s campaign promise to repeal and replace Obamacare, President Donald Trump went to Iowa to stump for… himself.

At the U.S. Cellular Center in Cedar Rapids, Iowa, on Wednesday night, Trump held a Make America Great Again Rally, a 2016 campaign-style event aimed to get the president out of Washington to energize both himself and his base.

While Trump did touch on the healthcare debate in Washington, declaring Obamacare “dead,” he also spoke at length about a number of topics, including the media, the Paris Agreement, and Commerce Secretary Wilbur Ross.

Ross, Trump said, was the right man for the job because he doesn’t want the “thinking” of a poor person, whom he claims would be doing the job of commerce secretary for the money.

Trump transitioned to Treasury Secretary Steve Mnuchin, a former hedge fund manager whom he insisted would also do a good job because he too was taking a pay cut to work for Trump.

Trump’s cabinet is the richest in American history, with Ross and Education Secretary Betsy DeVos both worth billions. The combined estimated wealth of Trump’s cabinet is greater than that of one-third of all Americans.