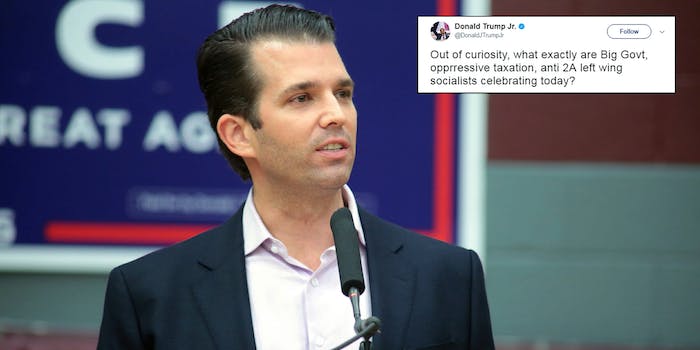 Trump Jr., who like his father uses Twitter to pontificate and has a history of being caught saying false things on the social media platform, couldn’t seem to comprehend that people with different political opinions than his would have reason to enjoy America’s Independence Day.

As you might expect, people didn’t seem to enjoy his assumption that only supporters of his father, President Donald Trump, could possibly be patriotic. When you ask Twitter such a provoking question, you should expect a swift response—which is exactly what happened.

That, despite your father's best efforts, we still live in a republic with checks and balances.

Don't know those people but most are celebrating what freedoms we have, yet to be destroyed by the corrupt administration

Former U.S. Attorney Preet Bharara also got in on the fun.

Also we might celebrate the ability of immigrant spelling bee contestants to know that "oppressive" has only one "r." Build a wwallll. https://t.co/zAed69PxYM

Some people were celebrating their ability to spell “oppressive,” unlike Trump Jr., and did not miss the irony of him having spelling issues on Twitter, like his father.

While other people weren’t in the mood to get drawn in.