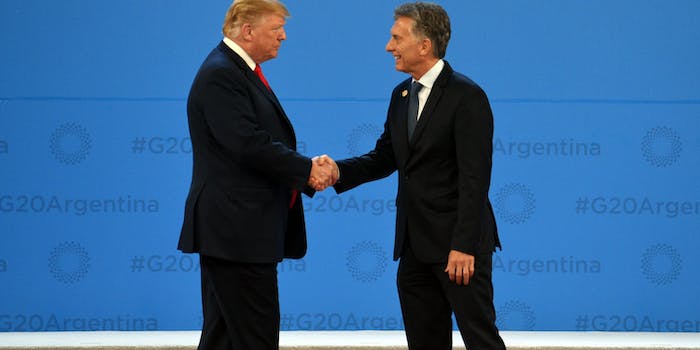 Trump did not have a good time at Argentina’s G20

His mind is clearly elsewhere.

Argentina hosted this year’s G20 summit, and while President Donald Trump attended, he clearly wasn’t having fun during his trip.

Trump’s problems started after he met with Argentina’s President Mauricio Macri on Friday. He insisted that he could understand President Macri better in Spanish than his English translation. (Trump does not speak Spanish.) He proceeded to drop his headpiece to the ground as an aide sheepishly walked onstage to pick it up.

That's after Justin Trudeau refused to call the new NAFTA by the name Trump made up and he also refused to hold up the document he signed.

Trump decided to drop his earpiece on floor while talking to Macri because he understands Spanish. He doesn't. He barely speaks English. pic.twitter.com/i0jBvz42uP

He then spoke about the “great job, successful job, a very big job” he did after purchasing Manhattan’s West Side railroad yard from Macri’s father. He also suggested the Argentine president “was a very young man, very handsome man,” implying Macri is neither young nor handsome anymore.

“Little did I know that his son would become a president,” Trump said. “And little did you realize that I was going to become president.”

Donald Trump talks about his long-standing friendship with Argentina's President Macri as the G20 Summit kicks off.

"I have been friends with Mauricio for a long time… People wouldn't know that he was a very young man, a very handsome man." https://t.co/Tw1b9Wsfxb pic.twitter.com/mOewAgjnCV

Was? Thank you for him. https://t.co/OQIXOqEqVh

I too, was young once

Trump has a genius for the put-down compliment https://t.co/F7cehRfFNK

when your friends talk about that awesome sleepover they had but you weren't invited #G20Summit2018 #G20 #trump #putin pic.twitter.com/sTYrGeMERy

VIDEO: All smiles, laughs & handshakes as MBS & PUTIN meet at the G20, with TRUMP approaching in the background. pic.twitter.com/RgEX6iNNbB

Trump in the background wishing he was up there high fiving them too!

The sequel to Misery begins. pic.twitter.com/32laPsaFfj

But nothing compares to Trump’s shining moment, where he abandoned Argentina’s president while onstage in an apparent attempt to flee his presidential duties as fast as possible. An aide quickly chased after the president, after which a hot mic caught Trump muttering “get me outta here.”

Trump keeps his tradition of awkward diplomacy by walking out on Argentine President Mauricio Macri as photographers click pic.twitter.com/90INvkBYi8

Trump did not seem to enjoy his time in Buenos Aires.

^^^ If your turn up the volume, just as Trump lumbers off camera you can literally hear him say "Get me outta here".

LOL "Get me outta here"…

THIS IS SO PAINFUL I ACTUALLY FEEL SICK. https://t.co/M9xnoatS61

It must be hard being such a stable genius. Walk off, stage right. https://t.co/0QM0ZV7Lan

What a complete fucking moron! https://t.co/jQ1ilcUKBp

This video says everything. Argentine President Macri is a stand-in for the world — Trump’s ignorance, arrogance and rudeness leave our friends confused, alone and horrified. https://t.co/h0GmGUIBQB

Some think the Russia investigation has Trump so unnerved that he’s struggling to function.

Russian state tv tonight mocking Donald Trump: anchor compares Putin’s “confident mood” at the G20 with “sullen Trump, who sat in a closed posture, as if he was protecting himself from everyone there & scared of putting his foot in it.” pic.twitter.com/uNG7APcOJ5

He is totally lost it. the pressure from those from his campain under indictment has to be enormous

maybe he saw mueller in the crowd and did a runner

What a fucking embarrassment Trump is. 😑

Someone must have yelled out
'Mueller is coming'

Yes he does. Just replayed it with headphones on and Trump clearly says"Get me outta here" to someone.

What a complete asshole

I want a Trumpster to try & tell me now that Mueller isn't living 100% inside Trump's head, rent free.

Bcz he is. Trump's cracking. pic.twitter.com/Mr90Yisa5R

Others pointed out that this is just Trump’s normal behavior during diplomatic functions: awkward and bizarrely self-centered.

#TheWanderer🚶‍♂️@POTUS left Argentina’s Mauricio Macri confused as Trump walks off in the middle of their photo op.

Poland – wanders outside the bulletproof protection.

WH – walks off w/out signing EO

Got off Air Force One & wanders on tarmac, he’s walked back to motorcade. pic.twitter.com/syrJ2gmsAL

Handshake wars: someone on Trump’s team should have read Howard French’s book All Under Heaven. XJP always stands on the left to force the other guy into an awkward reach. #天下 @hofrench pic.twitter.com/JhD5jvsqQQ