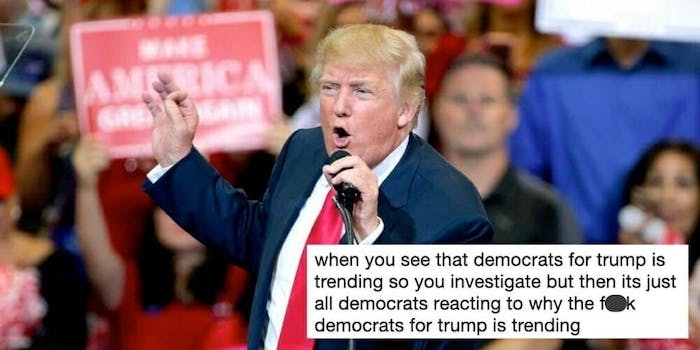 Twitter unites in collective confusion over ‘Democrats for Trump’ trending

It is more or less a universally held belief that Democrats are generally not big fans of President Donald Trump. While the party may disagree on a lot of issues—hence, the reason why there are currently [whips out calculator] 23 of them running for president in 2020—you’ll be hard-pressed to find a Democrat who genuinely supports Trump.

Blame the literal Nazis running in these streets, children in cages, the constant assault against our climate, or the fact that the United States seems to be rapidly transforming into actual Gilead, but Trump and his enablers pretty much stand for everything Democrats abhor.

Which is why many were surprised to find “Democrats for Trump” trending on Twitter Saturday morning.

Like a lot of things you see and read online these days, however, this seems like yet another instance of bots or foreign meddling. In fact, when confused liberals clicked on the trending topic, most of what they were met with were tweets from other confused liberals, wondering what in the hell was going on.

Everybody on twitter reacting to "Democrats for Trump" trending pic.twitter.com/MWI28NWFmE

And there has probably been no better use for the Jonathan Frakes “nope you’re wrong” meme:

When Democrats for Trump is trending but you find out it’s only because Democrats are in fact NOT for Trump and are simply disgusted by the thought of it
pic.twitter.com/NU11cREg0A

Others joked about what other inconceivable things could exist if “Democrats for Trump” actually was real:

Democrats for Trump are like Prisoners for Death Penalty pic.twitter.com/Z72SJlvWaP

"Democrats for Trump" is right up there with "Patriotic Americans for Trump." Neither exist.

So while never-Trumpers can all breathe a sigh of relief that there isn’t a secret movement of Democrats out there, diabolically turning the tide for Trump’s reelection in 2020, perhaps this is a good opportunity for everyone to remind ourselves of how we got into this mess in the first place. Namely, the splitting of hairs in 2016 over the fierce clash between Hillary and Bernie supporters.

Whichever one of these 23 (and counting, probably) candidates ends up being the front-runner in 2020, if Democrats can’t get their shit together and unite to put their support behind the nominee, then we may as well all be “Democrats for Trump.”