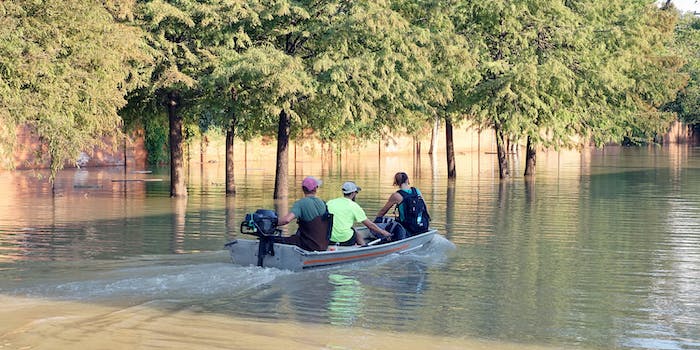 Alonso Guillen borrowed a boat with two friends to save people.

Alonso Guillen, who disappeared on Wednesday with two friends after the boat they were using to rescue victims crashed into a bridge and capsized, was found in a creek in Spring, Texas, the Houston Chronicle reported.

Guillen’s father, Jesus Guillen, said he had asked his son not to try and rescue people in the aftermath of the storm but was met with resistance. Alonso Guillen said he wanted to help people and borrowed a boat with two friends to help aid people who were trapped as a result of the hurricane.

Guillen was born in Mexico but moved to south Texas as a teenager and was a recipient of DACA, a Barack Obama-era immigration program that prevents the deportation of immigrants who were brought to the United States under the age of 16. Guillen worked as a disc jockey known as “DJ Ocho” for 101.9 FM in Lufkin, Texas.

President Donald Trump is expected to end the program during an announcement on Tuesday. The termination of the program is reportedly going to have a six-month delay of enforcement.

If Trump does end the program, former President Barack Obama is expected to speak out against the decision.

Alonso Guillen was a Dreamer who gave his life trying to rescue people in Houston. Remember Alonso and #DefendDACA https://t.co/dKjB9nylsp

Guillen’s mother, Rita Ruiz de Guillen, is applying for legal status in the United States and told the Chronicle that she hoped the U.S. Customs and Border Protection would grant her a humanitarian visa to bury her son in Houston. She was turned away at the border.

“I’ve lost a great son, you have no idea,” she told the Chronicle. “I’m asking God to give me strength. When we are with God, there are no borders. Man made borders on this earth.”

You can read the Houston Chronicle report here.