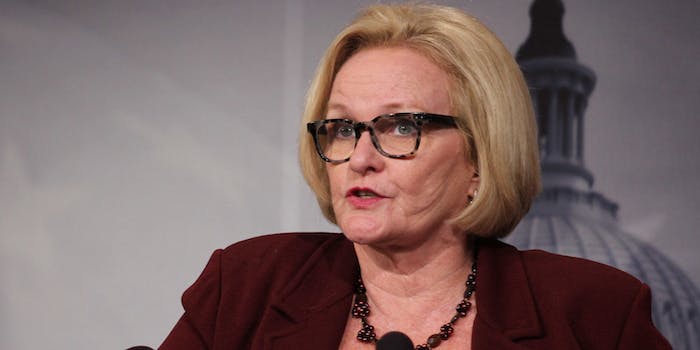 The ad features two men talking about McCaskill and her opponent, Missouri Attorney General Josh Hawley. While one says he doesn’t always agree with McCaskill, at least she works hard and does her job, unlike Hawley, who, they claim, makes wine runs and heads to the gym during work hours.

“[McCaskill] works hard, fighting against those tariffs, doing all those town halls,” one narrator says. “Claire’s not afraid to stand up against her own party.”

“Claire’s not one of those crazy Democrats,” the other man adds. “She works right in the middle and finds compromise.”

McCaskill is facing a tough race to maintain her seat in a state that is largely rural and increasingly Republican. The ad was almost certainly intended to appeal to middle-of-the-road Democrats. But the language of “crazy” Democrats is unclear and, some think, coded.

Chappelle-Nadal, who has represented Missouri’s 14th district, including Ferguson, since 2014, thinks that the so-called “crazy” Democrats mentioned in the ad are Black Democrats and activists in her district.

Chappelle-Nadal also retweeted a post from Missouri Rep. Courtney Allen Curtis (D), adding, “Bigots use the term ‘crazy’ all the time. Shame on you, @clairecmc.”

In a phone interview with the Daily Dot, Curtis said of the ad, “It’s absolutely a dog whistle. That’s why it’s only being played or aired in rural areas of Missouri, not urban areas” like St. Louis or Ferguson.

Because the ad doesn’t say exactly who the “crazy Democrats” are, “that in itself is a dog whistle and it’s open to interpretation,” added Curtis.

Later on Wednesday, Chappelle-Nadal tweeted, “If Sen. @clairecmc identifies with Trump in her tv and radio media ads,  then she must be a white NATIONALIST, too. Only a white nationalist would use the term ‘crazy Democrats,’” echoing concerns that McCaskill is too concerned about appealing to white moderate Republicans and undecided voters, rather than standing up for her base.

“Using the term ‘crazy’—while targeting a specific group—is the exercise of white supremacy. No bueno for POC,” Chappelle-Nadal added.

Chappelle-Nadal’s tweets touch on a dispiriting phenomenon in today’s politics—old-guard moderate Democrats attempting to appeal to moderate Republicans, independents, and undecided voters while ignoring the concerns of their base: people of color, women, LGBTQ people, and other marginalized constituents who have the most to lose if Democrats don’t win in November. “It’s hard to get people to go to battle with you if you haven’t been backing them up,” said Curtis.

Neither Sen. McCaskill’s nor Rep. Chappelle-Nadal’s office responded to the Daily Dot’s requests for comment by press time.