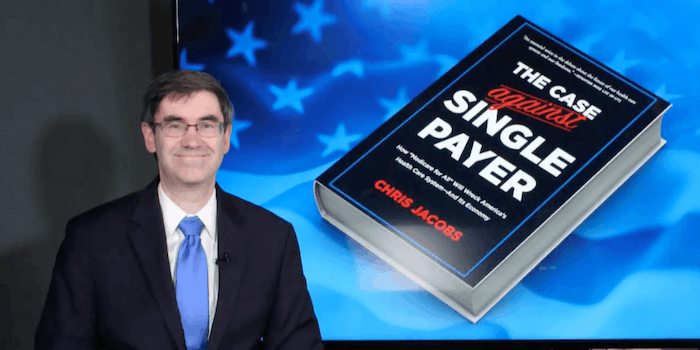 'Honestly this thread is a better case for single-payer than anything you’ll ever read from an advocate.'

Federalist contributor Chris Jacobs tried to debunk a claim for Medicare for All that was tweeted by a New York Times columnist on Thursday.

He ended up making a great argument for universal healthcare.

New York Times opinion writer Elizabeth Bruenig sparked a massive Twitter conversation when she shared her personal health insurance circumstances on Thursday. In between jobs, she said she temporarily was not covered by health insurance. Knowing well the costs of uninsured healthcare, Bruenig tweeted in favor of Medicare for All.

“Due to getting a new job, I temporarily have no health insurance and one child needs her 6/mo vaccines and the other has a fever/ear pain. not really sure what to do but i have a feeling it’s not gonna be cheap. love that freedom #M4A” @ebruenig tweeted.

In response, Jacobs crafted a 20-tweet thread attempting to discredit Bruenig’s story. Along the way, highlighting the complexity and cost of the current system, he made a better case for universal healthcare than Bruenig could have originally tweeted.

“THREAD: Let’s examine all the possible ways this @ebruenig tweet represents #FakeNews — and one of the sillier arguments for #SinglePayer I’ve heard in a long time… 1/,” he wrote.

THREAD: Let's examine all the possible ways this @ebruenig tweet represents #FakeNews — and one of the sillier arguments for #SinglePayer I've heard in a long time… 1/ https://t.co/4giYHyH4g4

In the seventh tweet, Jacobs brought up COBRA. The Continuation of Health Coverage Act is a government health plan that was made for workers that were in between jobs for reasons that vary from reduction of hours to other life events like divorce and dismissal.

COBRA, however, is not free.

“Qualified individuals may be required to pay the entire premium for coverage up to 102% of the cost to the plan,” COBRA’s website states.

Coverage up to 102% of the cost in America means a pricey medical bill. And Jacobs openly admits that.

“COBRA IS expensive, but for three months, it would cost a few grand at most. Do I have sympathy for a @nytimes columnist who says she can’t afford a bill amounting to a few thousand bucks? Absolutely not. 7/” he continued.

COBRA IS expensive, but for three months, it would cost a few grand at most.

Do I have sympathy for a @nytimes columnist who says she can't afford a bill amounting to a few thousand bucks? Absolutely not. 7/

This was the turning point for Jacobs. Because not everyone has a few grand laying around for healthcare costs, many Twitter users saw this as the perfect example of why the United States is in need of healthcare reform.

“Honestly this thread is a better case for single-payer than anything you’ll ever read from an advocate,” Vox founder Matthew Yglesias tweeted.

"a few grand at most"

“A few thousand a month is more than I earn in a month headass,” @onionsandpeppe1 tweeted.

Others chimed in as well, highlighting the ridiculous thread. His concluding tweet got over 1,000 replies.

In conclusion: @ebruenig's tweet lacked both facts and a compelling case. If that's the best case she and @BernieSanders can make to justify #SinglePayer, I can't see the American people signing off on this $30 trillion health experiment. END

All the important stuff has been stated so, to you, someone to whom "a few grand" is a throwaway, from the bottom of my heart, fuck you, fuck you, sincerely fuck you, you worthless piece of shit. I hope you believe in heaven simply so you can wonder why you didn't end up there.

Jacobs has written a book called The Case Against Single Payer. Must be a fascinating read.