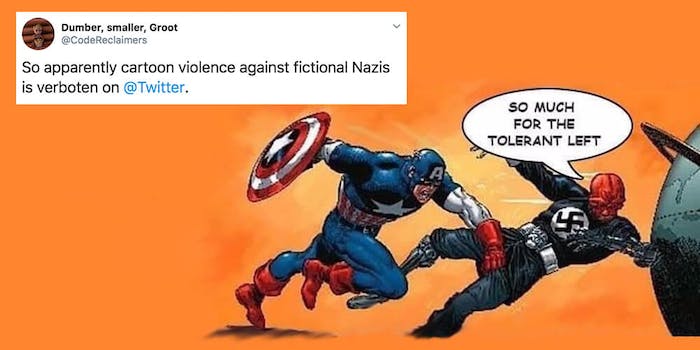 Twitter accidentally joined the debate over punching Nazis on Tuesday when the platform temporarily suspended an account over its header image of Captain America punching a Nazi.

“So apparently cartoon violence against fictional Nazis is verboten on @Twitter,” @CodeReclaimers tweeted on Tuesday.

A Twitter spokesperson told the Daily Dot on Wednesday afternoon that the account was suspended in error and had been restored.

@CodeReclaimers, whose real name is Allen McIntire told the Daily Beast he received a message explaining his account was locked due to hateful imagery. The cartoon image depicts Captain America punching fellow Marvel Comics character, as a Nazi supervillain.

The photo was set as McIntires’ profile cover photo for a year before the suspension. Now, @CodeReclaimers has posted the original image next to his suspension notice as his header.

Twitter has an algorithm to find hateful content, including images of Swastikas. The Daily Beast attributes McIntire’s suspension to this automated system.

Debates over the ethics of punching Nazis came to a boil in 2017, when a viral video showed self-proclaimed “alt-right” activist and white nationalist Richard Spencer being punched in the face. The man who punched Spencer called him a neo-Nazi at the time of the attack, according to the New York Times.

“There is a direct correlation between the rise of hate groups on social media and the frequent attacks,” Hankes told USA Today.

And despite platforms’ ongoing attempts to squelch hate speech, sometimes Twitter users like @CodeReclaimers get caught in the crosshairs.