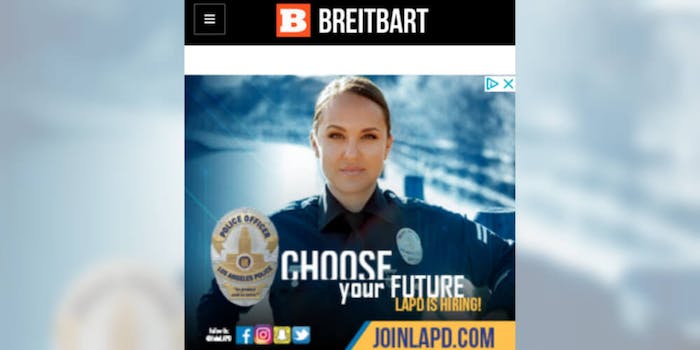 After backlash, the LAPD opened an investigation into the matter.

The Los Angeles Police Department (LAPD) has opened an investigation into a recruitment advertisement it ran Friday on far-right website Breitbart.

The ad featured an officer, with the overlayed words, “Choose your future. LAPD is Hiring!”

rt if you know exactly why the LAPD is running recruitment ads on Breitbart. https://t.co/PYt1TdI49E

After receiving backlash, both the LAPD and its recruitment Twitter account responded with a series of tweets.

“The LAPD celebrates diversity and embraces it within our ranks, and within the city we serve. We are aware that a recruitment advertisement has been circulated on a website that creates a negative juxtaposition to our core values,” the LAPD tweeted on Friday.

In a follow-up tweet, the LAPD announced it opened an “initial inquiry into the matter” to determine the ad’s validity and “what future steps can and will be taken to avoid this situation occurring in the future.”

We take matters like this very seriously, and have begun an initial inquiry into the matter and to determine its validity, as well as what future steps can and will be taken to avoid this situation occurring in the future.

The recruitment account said on Saturday that it purchased ads through Google and they “ended up on sites that do not reflect the City’s values through automatic placement,” presumably referencing Breitbart. In a follow-up tweet, it announced that it had temporarily ceased purchasing Google ads altogether “while we reexamine our ad filters and take all necessary steps to ensure tighter control of ad settings.”

Update 4:00pm CT, Oct. 2: A Google spokesperson pointed the Daily Dot to its “policies for where ads in our network can appear.”

“We also give advertisers additional controls over where their ads show, including the option to exclude specific websites or entire topics from their campaigns,” the spokesperson said.

We have stopped these Google Ads altogether while we reexamine our ad filters and take all necessary steps to ensure tighter control of ad settings. @LAPDHQ

The LAPD told the Daily Dot it had nothing further to add beyond its initial Twitter statements.

In 2019, a review of police officers’ Facebook accounts nationwide found that much of their online activity mirrors that of white supremacists. A sergeant in St. Louis, Missouri–who belongs to a department that has officers embroiled in the review–even said that she believes there are white supremacists on her force. So, featuring an officer recruitment ad on a website that is a cesspool for white supremacy–even by accident–is not really doing much to combat the problem.