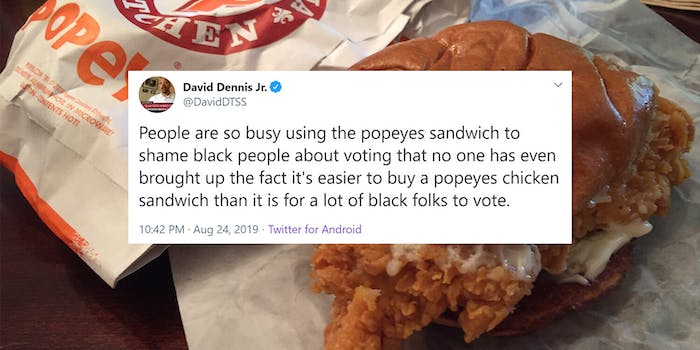 B.S. claim Black people will wait for Popeyes and not to vote gets demolished

No one fought harder or waited longer to participate in the democratic process.

The great Popeyes chicken sandwich craze of 2019 has sparked a battle between Black Twitter and people claiming that Black people will wait for chicken, but not to vote.

People nationwide waited in long lines, some for hours, to sink their teeth into fried chicken on brioche following the sandwich’s Aug. 12 release. The phenomenon inspired some to falsely opine that Black people will wait in long lines for chicken, but not to cast a ballot.

On Sunday, singer Janelle Monáe kicked off the controversy by tweeting, “Perhaps we put voting booths at every Popeyes location? While we wait on that sammich you can register and vote @popeyes holla.”

Monáe later deleted the tweet and apologized, but it was too late. Black Twitter rose up to challenge her and others, like Newt Gingrich, who made the same claim.

Their point: No one fought harder or waited longer to participate in the democratic process; nor have other groups continued suffering as much voter suppression. And they brought mountains of evidence to prove it.

“People are so busy using the Popeyes sandwich to shame black people about voting that no one has even brought up the fact it’s easier to buy a Popeyes chicken sandwich than it is for a lot of black folks to vote,” David Dennis Jr. said.

To get a chicken sandwich, you don’t need to take off work or have an ID, it doesn’t matter if you have a felony, and, “My order won’t get tossed out in a government-sanctioned act of chicken order suppression,” he continued in the thread.

Dennis was one of many to point out facts like: Black women vote at higher rates than most other groups; if you subtract those disenfranchised by felony convictions, Black men do too, as the Atlantic’s Adam Serwer noted.

Further, nobody ever suggests that white people should care as much about voting as they do for Adele tickets.

Janelle's comment was… unfortunate, but I am SCREAMING at Cynthia's enthusiastic response

"The coloreds are at ease in the chicken eateries, of course they'll vote there" pic.twitter.com/cGI58gGspg

When my white friends went crazy for McDonalds Rick and Morty thing it was just a fun thing they did. When my black friends go crazy for a new chicken sandwich everyone is telling them to go register to vote.

Let. Black. Folk. Eat. Chicken. Sandwiches. In. Peace. Without. Needing. To. Vote. Or. Stand. In. Line. For. Unemployment. Challenge.

Black people have given their lives, property, and time to access the basic right to vote.