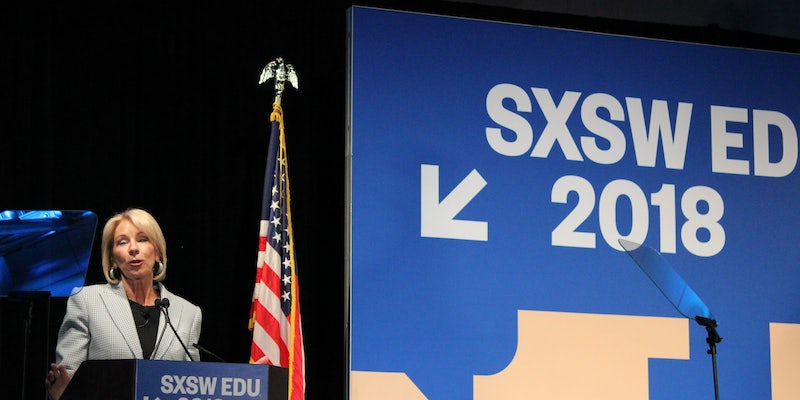 When DeVos read aloud a question from the audience asking how society can rethink the educational landscape to serve communities of color, there was a dull silence before she realized the question was intended for her.

“Oh, was that to me?” Devos said after a few audience members in the 400-person conference room called out wanting her to speak. The audience responded with an audible “yes” and applause.

“I think that we have to empower a lot more individuals like we have up here on the stage,” DeVos said, referring to panelists David Clayton of Strada Education Network, a non-profit connecting students to careers; Ben Wallerstein, CEO and co-founder of consulting firm Whiteboard Advisors; and Anant Agarwal, CEO of edX, a modular-based learning platform founded by Harvard and MIT.

DeVos eventually answered she also wants to empower individuals engaged within every level of education to “try new things” and “serve students on an individual basis.”

“We have to unleash the creativity and innovative power that is resident in our whole population and in doing so, we are ultimately going to serve all of our nation’s children,” DeVos said.

Agarwal told DeVos “the technology is there” to push progress in education, but policies need to change to make education more of a human right than a privilege.

Agarwal’s company edX has 15 million students who pay for modular online training to earn specific skills and MicroMasters certificates. The innovator said he wanted to urge higher institutions to accept these credentials and fight inequality by throwing out learning benchmarks such as standardized tests.

“A lot of studies have shown that tests like the SATs and ACTs are really a test of how rich your parents are,” Agarwal said. “Instead, why don’t we just throw all these tests away and make it open admissions? Why do we have limited admissions for something that’s a human right?”

Michelle Read works at Texas State University helping faculty design their courses and said before the event she was also looking for DeVos to address equity issues and making sure all students are getting opportunities.

“Students whose parents are paying straight-out for their tuition and they’re not having to take out loans may have had a very different educational background than students who are on Pell Grants or taking out loans,” Read said. “We tend to, in higher education, assume that all students come from an equal playing field without considering that might not be the case.”

Attendees of the event didn’t meet DeVos at the door with protest signs, but the atmosphere of the room was hostile as DeVos spoke about making changes for equality in education. According to the New York Times, DeVos’ efforts to expand educational opportunity “have focused little on existing public schools, and almost entirely on establishing newer, more entrepreneurial models to compete with traditional schools for students and money.”

In DeVos’ home state of Michigan, where her efforts have been most vigorous in expanding charters, national reading and math scores have fallen. Instead, the Times writes, “most charter schools perform below the state average.”

In her 1st year running the Education Dept., Betsy DeVos has been “a boon for for-profit colleges, student loan companies, and advocates of school privatization,” while harming public schools, according to a report by Elizabeth Warren and Katherine Clark. https://t.co/W3GsQEBQcB

Oh look, @BetsyDeVosED showed up at #SXSWEDU on a panel with zero educators. https://t.co/ReSNRtQX63

Charter schools are also among the nation’s most segregated, an Associated Press analysis finds. The study, made up of national school enrollment data found that “as of school year 2014-2015, more than 1,000 of the nation’s 6,747 charter schools had minority enrollment of at least 99 percent, and the number has been rising steadily.”

Studies show that schools, charter or otherwise, that are highly segregated tend to underperform on test scores compared to schools with a more evenly distributed population.

During the panel’s Q&A session, Agarwal insisted the tools were in the hands of the government to make education an equal playing field for students of different backgrounds. But earlier in her address, DeVos had already said she believes change will instead come from “entrepreneurs, philanthropists, teachers, and parents.”