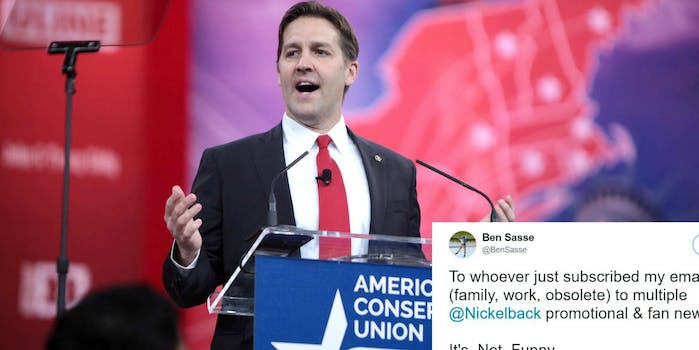 GOP Sen. Ben Sasse keeps getting signed up for Nickelback newsletters, and he’s not loving it

It's the newsletter from hell.

What’s arguably worse than seeing Nickelback live in concert? Getting multiple promotional fan and newsletters due to an undesired subscription.

The nightmare-turned-reality was bestowed upon Nebraska Sen. Ben Sasse by an anonymous entity Friday, described by the Republican as “Not. Funny” via his Twitter account.

Sasse has openly expressed his dismay about the Canadian rock band in the past, often posting his disapproving views and trolling Nickelback on social media. This is the second time so far this year that Sasse has found himself on the receiving end of an unwanted subscription.

This is the last straw. pic.twitter.com/1lq6sEzRDU

if it weren't for Nickelback, there'd be no risk of a trade war https://t.co/BbP2DIdMoP

Though Sasse ensured the world that he does not think it’s funny (especially not for a second time), many on the Twittersphere are smug with the wonderful evil that is the mailing list:

But hours later, Sasse tweeted that he received an apology from prankster Sen. Orrin Hatch (R-Utah). Though no official statement has been released by Hatch’s office, he’s undoubtedly commencing with more online trolling himself:

Just didn't want you to miss this. It must be a big day in the Sasse house. pic.twitter.com/0CVBtbrWMT

Some on Twitter however took the banter as an opportunity to ask more serious questions about the GOP healthcare reform:

Ha. Hilarious stuff. Now where's the health care bill you're hiding from the tens of millions it will literally condemn to bankruptcy/death?

So if you won't listen to Nickelback, will you listen to experts in hearings on healthcare before voting on AHCA?

Very cute, but it’s hard to laugh when 23 million people are about to lose health insurance. What are you going to do to prevent that?

Sasse, you will never forget this. It’ll be ingrained into your memory. Like a photograph.