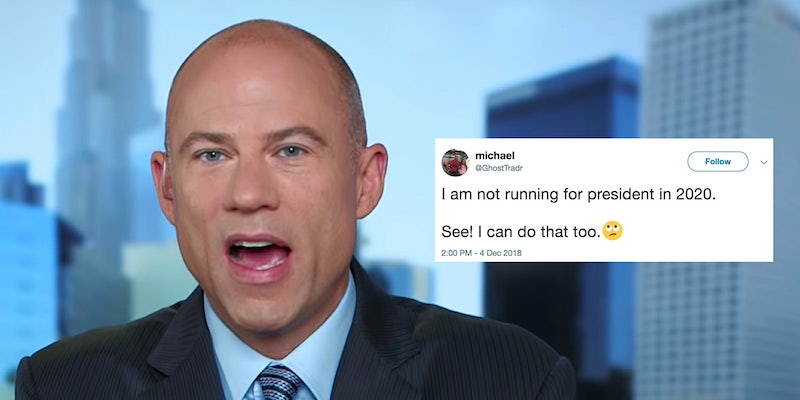 After Avenatti said he's not running, a bunch of regular folks said the same thing.

Michael Avenatti, the attorney who gained notoriety after representing Stormy Daniels, announced on Tuesday that he will not attempt to run for president in 2020. Since Avenatti’s shot at the White House seemed as likely as any average Joe’s, a bunch of average Joes are now announcing on Twitter that they’re not running for president, either.

The meme took off after Avenatti released a statement on Twitter and made headlines with his decision not to run.

Since it seems newsworthy; I want to clarify that I will not be running for President in 2020, thanks.

Between his disdain for President Donald Trump and connection to Daniels, who was paid to keep secret an affair with the president, Avenatti seemed confident that a 2020 run was in his future. In August, he tweeted a list of his intended platforms.

But an October report that Avenatti evaded taxes and an arrest related to domestic violence accusations in November narrowed his already-slim chances of securing an election bid.

In the statement he released on Twitter, Avenatti said his family was the only thing keeping him from running.

“I do not make this decision lightly—I make it out of respect for my family,” Avenatti wrote. “But for their concerns, I would run.”