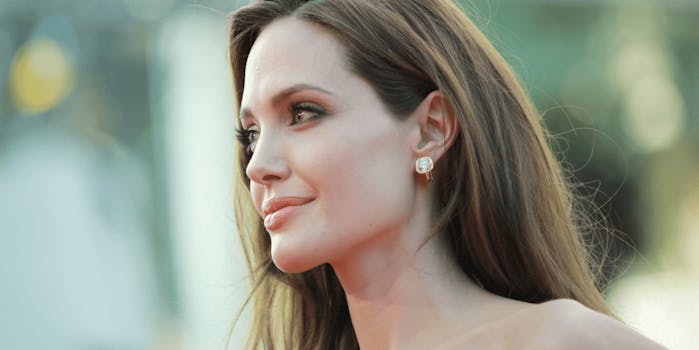 Over the weekend, leaked court documents revealed that at one point the International Criminal Court (ICC) was considering Angelina Jolie as a decoy dinner guest to lure Ugandan warlord and social justice meme Joseph Kony out in public. Kony went viral back in 2012 after an overwrought video about his crimes inspired a lot of people to buy merch that said #Kony2012 on it, but that did not quite capture or stop him.

According to a report published in British newspaper The Sunday Times, Luis Moreno Ocampo (the former chief prosecutor for the International Criminal Court) asked Jolie to take part in a scheme to “lure Kony out of hiding in the Central African Republic.”

The plot was outlined in emails that were reportedly shared with the Times by French website Mediapart, and involved Jolie’s husband Brad Pitt as well.

“Forget other celebrities, she is the one,” Ocampo wrote in one e-mail. “She loves to arrest Kony. She is ready. Probably Brad will go also.”

Jolie served as a U.N. special envoy and once decried Kony.

“He’s an extraordinarily horrible human being [whose] his time has come,” she said.

The plot involved “embedding Jolie and Pitt with a unit of U.S. Special Forces soldiers close to Kony’s stronghold.” Ocampo claimed that Jolie suggested luring Kony to a private dinner where he would be arrested.

American troops, Ocampo assured her, were “eager to get Kony … [and] after meeting you, they will do it.”

However, the plan apparently fizzled out, with Jolie eventually not replying to several back-to-back emails from Ocampo. Page Six points out that his record as a lawyer was pretty weak (one win in nine years on the court), so he might not have been the best person to convince her of anything.

Ocampo reportedly also reached out to George Clooney and Sean Penn with this idea.