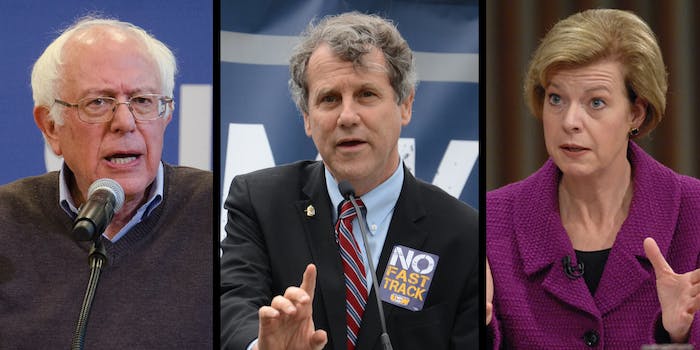 They want some answers from the retail giant.

A group of Democratic senators want to know more about the working conditions at Amazon facilities, following reports that they have a higher rate of injuries than average warehouses.

The group of 15 senators was led by Sen. Sherrod Brown (D-Ohio), Sen. Tammy Baldwin (D-Wisc.), and 2020 Democratic presidential hopeful Sen. Bernie Sanders (I-Vt.). They sent a letter to Amazon CEO Jeff Bezos last week, and made it public on Monday.

In it, they cited a number of news reports that documented conditions at Amazon warehouses, and argued that the retail giant needs to “overhaul this profit-at-all costs culture at your company.”

“Recent investigations into Amazon’s safety records found that the injury rate of workers at Amazon facilities is much higher than the injury rate for private sector employers in the U.S.—and even for the warehouse industry generally,” the senators wrote in their letter. “Any practice that puts profits before worker safety is unacceptable. We urge you to take immediate steps to protect your employees from workplace injuries. Your employees’ lives and well-being depend upon your swift action.”

The senators point to reports that detailed quotas Amazon employees are expected to meet—and the lengths they go physically to meet them; and injuries that have occurred at the company’s facilities.

Within the letter, the senators ask Amazon to reduce those quotas, schedule frequent breaks, and eliminate a policy of firing workers who don’t meet their quotas three times. They also ask for the company to implement a policy that doesn’t allow for supervisors to discriminate against workers who report injuries or safety concerns, among other things.

In a statement to the Verge, Amazon said it takes an “aggressive stance on recording injuries no matter how big or small” and invited the senators to take a tour of a warehouse.

The senators said they wanted answers from Amazon by Feb. 21.