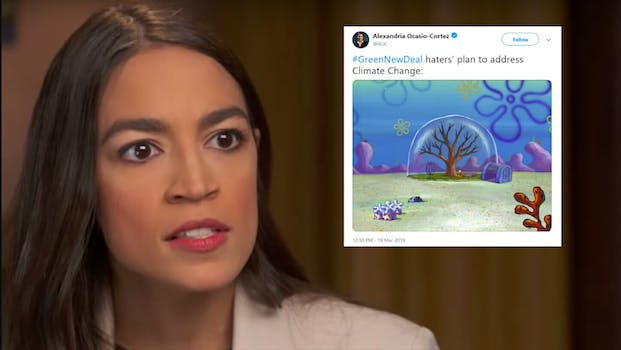 She's flexing her fluency in memes.

While some Democrats have avoided outright backing the Green New Deal and Republicans have called it a Fyre Fest-style scam, proponent Rep. Alexandria Ocasio-Cortez (D-N.Y.) is trying to drum up support in the language the internet knows best: SpongeBob memes.

On Tuesday, Ocasio-Cortez tweeted “#GreenNewDeal hater’s plan to address climate change” along with a picture of a glass dome of air underwater that millennials will no doubt recognize from the Nickelodeon cartoon SpongeBob SquarePants. In short, there is no sort of preventative plan.

Ocasio-Cortez and Sen. Ed Markey (D-Mass.) introduced the deal back in February. It outlines a vigorous plan of attack to prevent climate change from proliferating and reversing the damage it’s already caused, as well as proposals to create jobs and reduce income equality.

While polls have shown most Americans agree with the deal’s tenets, some key Democrats have wavered, calling it simply a “suggestion” of policy or offering their own alternatives. Since younger, progressive legislators have been some of the deal’s most vocal supporters, the divide represents a much larger split in Democratic party politics along generational lines.

The vehement response of support from Twitter users seems to only support this theory. While some users mocked the Republican party for not taking the threat of climate change seriously, many also called out Speaker of the House Nancy Pelosi (D-Calif.) for failing to establish a firmer party stance.

GOP : This is fine. pic.twitter.com/A9LIl9G2ds

Us in 50 years if we reject the #GreenNewDeal and get ravaged by Climate Change pic.twitter.com/V5YOq4kaqw

Of course, a few users responded back with memes of their own deriding Ocasio-Cortez. But the senator has previously established that her haters’ meme game is “so weak.”