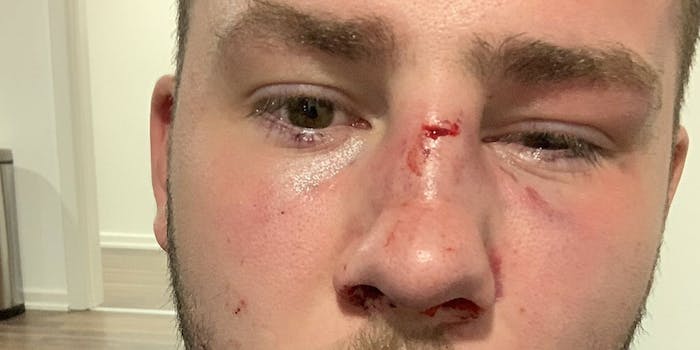 Was this conservative really attacked, or did he just sh*t himself?

The internet is currently fighting over whether a conservative activist in the U.K. was attacked or merely passed out, shit himself, and fell face-first into a bathroom door.

The incident began on Thursday when Alex Tant-Brown, a student at Sheffield Hallam University, alleged on Twitter that he was assaulted for his conservative beliefs.

“When someone recognises you as a Conservative on a night out,” Tant-Brown tweeted.

A picture accompanying the tweet shows a cut on the student’s nose as well as swelling around his left eye.

When someone recognises you as a Conservative on a night out pic.twitter.com/SXfbWsikxB

On Saturday, however, a Twitter user by the name of Liv sent out a screenshot of what appeared to be a news article debunking the incident.

The alleged article, which looks to come from British tabloid newspaper the Daily Mirror, says Tant-Brown soiled himself after passing out and cutting his nose on a bathroom door coat hook while intoxicated.

The tweet quickly went viral, earning over 7,000 retweets and more than 43,000 likes in the process.

Although comments under Tant-Brown’s photo were quickly filled with references to the alleged article, the student did not respond to allegations that he had lied about being attacked.

TLDR: turns out this guy got plastered and shit himself in a toilet stall and hit his nose on a coat hook on the door, got embarrassed and decided to lie about it to try and get something out of Browning his pants.

For quote marks Daily Mirror uses " not “ on their site. They close quotes with the period "before the quote ends.", too! Look at the final paragraph on yours. #TruthMatters pic.twitter.com/pMQELZ1Opv

Secondly, the quote that claims that Tant-Brown soiled himself is not attributed to anyone. And perhaps most importantly, a quick search on the Daily Mirror shows that the article doesn’t actually exist.

The Daily Dot reached out Liv, whose tweet went viral, and asked about the origins of the alleged article.

Liv stated that she had found the screenshot in the replies to Alex’s picture. When asked whether she believed the image was real or fake, Liv replied, “I just like bullying tories.”

The Daily Dot also reached out to Tant-Brown in an attempt to learn more details about the alleged attack but did not receive a response by publication.

So while Tant-Brown may not have been hurt after shitting himself during a night out, it currently cannot be proven whether his injuries were the result of a politically-motivated attack.