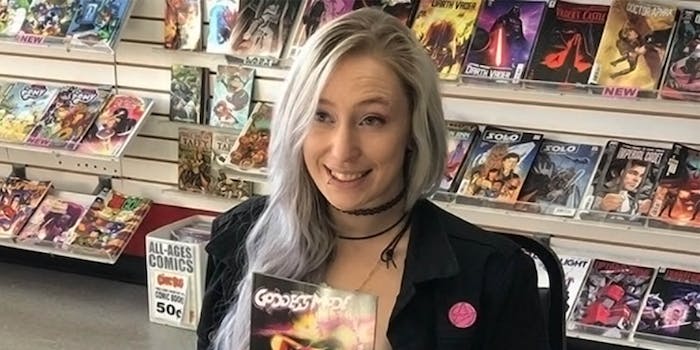 'It's been the better part of a decade and I'm still afraid of him.'

Zoë Quinn, the 32-year-old indie game developer forced into the spotlight during the Gamergate controversy, has accused fellow game developer and ex-partner Alec Holowka of harassment and abuse.

Quinn accused Holowka, best known for working on Aquaria and Night in the Woods, of abuse in a Twitter thread late Wednesday night. Quinn, who uses they/them pronouns, was prompted, as they put it, by “Nathalie Lawhead’s post about her rapist being an industry legend.” Lawhead recently shared a blog post detailing her own experiences with abuse and rape.

“So many of the little details, down to the timing, had been things I’ve gone through too,” Quinn wrote of Lawhead’s post. “Its haunted me ever since. It’s why I don’t go to GDC anymore. I’m drowning too.”

Quinn says they entered into a long-distance relationship with Holowka, who’d offered his support after her personal life was in turmoil. But when they went to visit him in Winnipeg, Canada, Quinn said, things turned sour.

“While I was in Winnipeg he slowly isolated me from everyone else in my life while absolutely degrading me whenever we were alone,” Quinn wrote. “He convinced me to let him program my game instead of the friend I’d been working with, despite many protests. He screamed at me for over an hour once because of the tone in my voice when I said hello. He wouldn’t let me leave the apartment without him and refused to give me the code to get in.”

Quinn detailed how Holowka blamed them for a past instance of sexual abuse from a previous partner, and brought it up time and again—even during sex. They wrote about how they would hide in the bathroom to avoid Holowka, who would become angry and sometimes violent when the two were alone. Quinn’s story took a particular turn after the planned two-week visit ended, and Holowka refused to purchase Quinn’s ticket home, as agreed upon.

“I spent a lot of time hiding in the bathroom from him. My roommate started to get scared and asked if I needed help getting out,” Quinn wrote. “I said yes, and Alec barely looked at me as I left.”

Quinn said they returned home and promptly sent Holowka a “cordial and friendly break up email.” In response, Quinn wrote that Holowka sought to blacklist them from important industry events. “He tried to ruin the career I’d barely started,” they wrote. “To a degree it worked.”

Quinn revealed that the night the Gamergate controversy started, they wrote a blog post about Holowka without naming him. Immediately after, Quinn wrote that several other women reached out, asking if it was Holowka. They’d experienced similar abuses at his hand, they said, and Quinn realized they were far from the first.

Quinn went on to explain that they believe Holowka is ill and advocated for treatment rather than punishment. They noted that they stayed silent for so long out of fear, and a hope that maybe someone else would step forward. When it didn’t happen, they finally realized they had to stand up and say something.

In response to Quinn’s Twitter thread, fans and strangers rallied to show their support for the developer. Quinn noted, in the comment section, that they’d received messages from other people Holowka has reportedly abused. “Jesus Christ the messages I’m getting rn from other people he’s hurt,” they wrote. “I had no idea it was so bad. Im so sorry I waited this long to come forward but now whatever happens to me I don’t think I’ll regret it.”

Also sorry to everyone who I’ve avoided bc they seemed to know or be friends with him. I didn’t think less of you I just knew he wanted to shit on me whenever possible from what had circled back to me like the blacklisting and stuff and was worried you’d hate me before meeting me

Quinn and Holowka did not immediately respond to the Daily Dot’s requests for comment.

In 2014, a blog post from Quinn’s ex-boyfriend Eron Gjoni sparked the Gamergate controversy. In his blog post, Gjoni accused Quinn of sleeping their way to success as a developer. Despite the accusations quickly being revealed as false, Quinn was subject to months of harassment that ultimately served to expose the sexism underlying the video game industry.

On Tuesday, more stories of abuse and misconduct in the gaming industry became public via Twitter.

Correction: The headline and two sentences in this article have been corrected to reflect the proper pronoun for Zoë Quinn, who uses they/them.