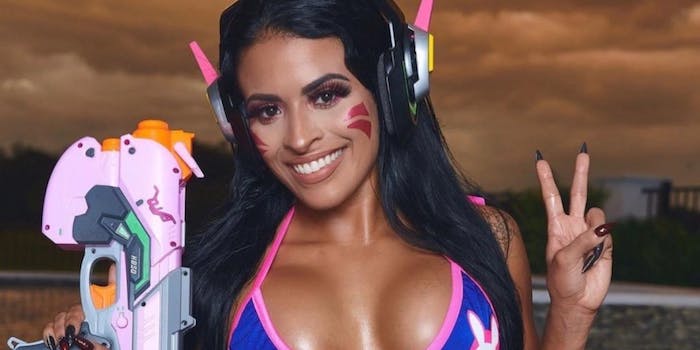 But sex workers wonder whether her presence on OnlyFans is ideal.

World Wrestling Entertainment’s wrestlers work as independent contractors, and a number of them were forced to halt their Twitch streaming careers or hand over profits to the wrestling media giant. But one wrestler is defying the WWE’s control over monetized content creation, and she’s doing it a unique way: Zelina Vega remains active on her cosplay-focused OnlyFans.

Following WWE’s mandate, wrestlers such as A.J. Styles and Mia Yim have refrained from streaming on Twitch. But Vega remains active on both Amazon’s games streaming website and on her OnlyFans. She isn’t necessarily hiding it, either: Vega lists her cosplay Instagram on her Linktree, which includes links out to her OnlyFans. Bleeding Cool implies the move comes in defiance of the WWE’s request, and that Vega “doesn’t appear to be slowing down” her OnlyFans presence any time soon.

Journalist Marcus K. Dowling has written about both the adult industry and wrestling. Given the “unusual financial crunch” of the pandemic era, Dowling told the Daily Dot, the WWE is forced to “leverage income streams under their brand, using their independently contracted, at-will employed talent.” This creates tension between the WWE and its wrestling talent, many of whom have already monetized their brands online within and outside of WWE.

“Zelina Vega deciding to start an OnlyFans (not a platform WWE has pulled talent from) with a brand new identity (Megan Minx) that has no online or wrestling business-related history to Zelina Vega or Thea Trinidad, is a brilliant skirting of the rules that is ultimately unassailable by WWE,” Dowling said. “Not everyone can do this, though. Zelina is absolutely an outlier. By defining a new identity—via content thoroughly unrelated to her wrestling career or character—she can’t be penalized.”

OnlyFans’ mainstream popularity peaked during quarantine, and several high-profile celebrities—including Jordyn Woods, Cardi B, Bella Thorne, and Tyler Posey—began using the app. Vega may not be as mainstream as these celebrities, but her presence on the site still contributes to the online “gentrification” of OnlyFans, adult model and wresting fan Lux Lives told the Daily Dot. Lives said the celebrity side of OnlyFans is “a different world” and, with few exceptions, “softcore at best.”

“Messing with the algorithm, and forcing a lot of sex workers to continue to lose subscribers. This is just another consequence of the [SESTA-FOSTA] agreement, and a clear example of how sex work is treated and marginalized,” they said, referring to the law that makes websites responsible for explicit content. “Then made mainstream and once again swallowed by the patriarchal capitalism. And still no sex workers being respected and paid.”

Vega’s move to OnlyFans isn’t too surprising. Lives said the WWE and the adult industry have been “entangled for a long time” and noted how WWE wrestlers regularly appear at the adult industry’s AVN Awards and meet sex workers in Tampa, Florida, where WWE training facilities reside. While Lives agrees that there’s “cascading exploitation going on” that ultimately leads to sex workers receiving the brunt of the damage, she doesn’t see celebrities as an inherent threat.

“The thing I’m really interested in is how sex-working celebrities have access to the full array of social media marketing tools, but regular sex workers don’t,” Lives told the Daily Dot. “So how is this trend gonna shape [terms of service] in the future? Right now it’s like a kind of oligarchy is forming where only a chosen few are ‘allowed’ to do sex work. At the same time, will it benefit us in a post FOSTA world to have a mainstreamed and normalized sex work platform?”

Dowling spoke to similar connections between adult creators and wrestling, and he also believes Vega could make inroads between the professional wrestling world and the adult industry. He surmised that Vega could work with sex worker and sex worker-adjacent figures in the wrestling sphere, benefiting both groups in the long run.

“Ultimately, there’s an element of ‘we’re all carnies’ amongst wrestlers and sex workers that’s a tenuous, but necessary, middle path that should develop,” he told the Daily Dot. “It’s a BOLD move, but one that into itself has immense potential for easing open a door and road that allows for legitimate financial stability for wrestlers and sex workers who are, to tie this back to the beginning, at-will employed, independently-contracted, entertainers.”

The Daily Dot reached out to Vega for comment.