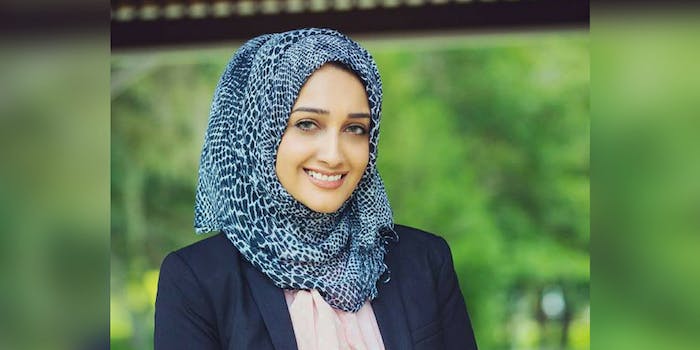 The officers refused to give her their names.

A Muslim graduate student was patted down by TSA agents at a Boston airport, touched in the groin area, and forced to pull her pants and underwear down for the agents searching her to show them her bloodied menstruation pad.

According to HuffPost, Merchant, 27, was patted down by a TSA officer while on her way to Washington, D.C., who told the agents they needed to take “a deeper look” when they patted down her groin area. She explained to two of the agents that she was on her period and wearing a menstrual pad, but was told if she didn’t comply to a private search, state troopers would intervene.

She was then led to a private room where agents made her pull down her pants and underwear, and show them her bloodied menstrual pad, she said.

Merchant requested the names of the agents after the search, but the officers instead covered their badges with their hands and walked away for her, she told the publication.

Merchant’s search in Boston is one of a series of “intrusive, humiliating searches—often in ways that appear duplicative and unnecessary” that she’s experienced since 2016, according to the American Civil Liberties Union (ACLU). The ACLU believes Merchant is on a government watch list and filed a formal complaint with the Department of Homeland Security (DHS) last week to try to stop her from being singled out.

Merchant, who is the founder and editor of her own website, Zainab Rights, believed she’s being punished for speaking out against her series of searches. The ACLU says she’s been questioned by border officials about her religious beliefs, her thoughts on ISIS, and why she’s criticized the U.S. government on her website.

DHS has previously told Merchant, and TSA told HuffPost, that it could “neither confirm nor deny” whether she’s on a federal watch list.