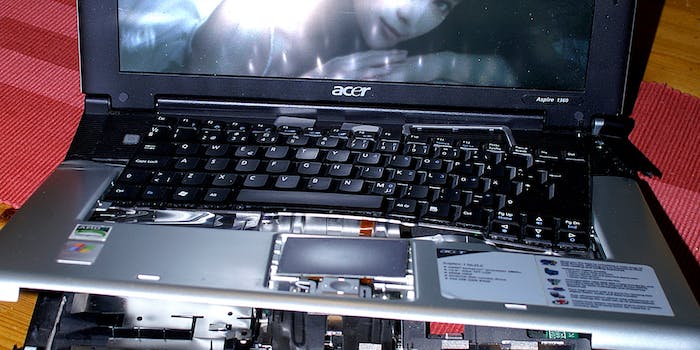 Zach Anderson will be given probation.

In July, 20-year-old Indiana man Zach Anderson was sentenced to 90 days in jail and ordered to register as a sex offender in two states, and remain on those registries until 2040. As a sex offender, he’d be forbidden from owning a smartphone or using the Internet for the next five years, talking to anyone younger than 17 (aside from immediate family), going anywhere that serves alcohol, and being away from home past 8pm every night.

Anderson was dealt this heavy hand after having sex with a 14-year-old Michigan girl when he was 19.

But just a few months later, he’s been removed from the Michigan sex offender registry and re-sentenced to two years of probation. Here’s the thing: Anderson didn’t actually know the girl was underage.

She lied to him and said she was 17, a year older than the age of consent in Michigan. Anderson met the teen last winter through the app “Hot or Not,” a Tinder-esque platform that’s been around for more than a decade. The girl was registered under the “adults”  section of the app, according to ABC News and, before meeting in person, Anderson asked about her age.

“She had told me 17… I just got out of high school,” he told ABC News. “So it’s two years’ difference. I didn’t think that was a big deal or anything.” He drove from his hometown in Elkhart, Indiana, to Niles, Michigan, and the two had consensual sex in a nearby playground.

Things got messy when the girl’s mom thought she was missing and called police. A couple months later, Anderson was arrested and pleaded guilty to fourth-degree criminal sexual conduct. The girl in question admitted to police she lied about her age, and the girl’s mom actually defended Anderson during his trial saying, “I don’t want him to be a sex offender because he really is not.”

But that wasn’t enough to save him.

Judge Dennis Wiley told Anderson, “You went online… trolling for women to meet and have sex with. That seems to be part of our culture now. Meet, hook up, have sex, sayonara. Totally inappropriate behavior. There is no excuse for this.”

What could have been a bleak future for Anderson, though, now shows signs of promise with his new sentence, handed down in Michigan by Berrien County Judge Angela Pasula. Pasula granted Anderson status under the state’s Holmes Youthful Trainee Act, which gives leniency to first-time offenders between the ages of 17 and 20.

“I’m feeling really good,” Anderson told Nightline. “I think this sentence was a lot more reasonable than the first time.” Though the re-sentencing is a major victory for Anderson, he’s still a registered sex offender in Indiana (though he and his legal team are hoping to get that changed as well), and still has to abide by certain restrictions as part of his probation: He can only use a computer for school, can’t have contact with anyone under 17 without a “responsible adult” present, and can’t get within 500 feet of a park where children are present, among other rules, according to the Elkhart Truth.

Some might say those restrictions are still unfair, and that Anderson did nothing wrong—or at least, had no intentions or knowledge of doing anything wrong. But many public officials remain in the “he should’ve known better” camp. Michigan state Sen. Rick Jones (R-Grand Ledge), who helped write the state’s sex offender registry law, told ABC News Anderson should’ve been smarter about the whole thing and perhaps requested proof of the girl’s age, in the form of a driver’s license or the like, before having sex. Even Pasula, who lightened up Anderson’s sentence, believes he was in the wrong. She told him his actions were superficial, sexual, and “all about instant gratification,” according to the Elkhart Truth. “You went out looking for trouble and you found it. It was tragically wrong.”

Whether Jones is right or not, Anderson’s father, Les Anderson, questioned the harsh punishment on another level. “If our son’s a sex offender, there’s a lot of other people on that list like him which dilutes the list, and almost makes it meaningless,” he told ABC News.

The grey area in this case is vast. Was it up to Anderson to somehow verify his one-night-stand’s age to be sure he was in the legal clear? Or was he just a guy in the wrong place (Hot or Not’s interface) at the wrong time? Does any of the blame fall on Hot or Not’s shoulders? According to the app’s rules, users between the ages of 13 and 17 are kept separate… but obviously there’s an easy workaround for that, as this case shows.

Photo via Kjell Eson/Flickr (CC BY 2.0) | Remix by Max Fleishman