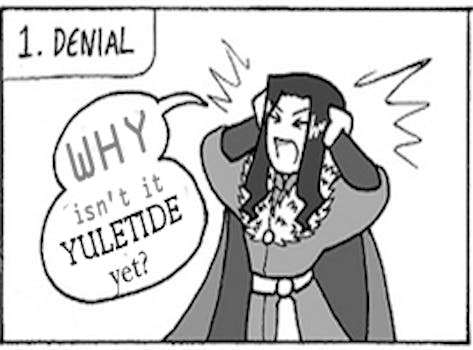 Behind the scenes of the Internet’s biggest fanfiction exchange

Moderator elynross opens up about the best and sexiest fanfiction expected this season.

For the thousands of fans who participate in Yuletide, the Secret Santa fanfiction exchange now in its 10th run, the Christmas holiday doesn’t really start until they hear the words “Yuletide is now live.”

But elynross, who along with Yuletide’s creator, Astolat, has headed up the enormous endeavor for the last five years, gets to see the massive influx of fics—presents from anonymous gift-givers in a rare fandom of your choice—as they’re coming into the Yuletide archive, housed on AO3, the Archive of Our Own.

So how hard is it for her not to peek in her stocking before all the stories are in? Read on to find out and learn many more Yuletide secrets!

Daily Dot: If you had to describe Yuletide to someone who’s never heard of it, what would you say?

It’s a writing challenge where a whole bunch of people write stories for each other based on books and shows and movies and music videos and anime/manga and just about any other thing you can think of.

DD: How hard is it to avoid peeking at your fic before the challenge goes live?

Not hard at all. I’ve worked very hard in past years, when it was much easier to accidentally get spoiled. I never was one to want to open my presents early!

DD: How did you come to be involved in moderating?

If anyone had told me 10 years ago I’d be co-running this thing, I’d have told them they were clearly on something. When astolat [the challenge creator and head coder] started talking about it, I thought all my friends had lost it, and it didn’t sound like any fun at all. I’d never even had the glimmer of a story idea outside of Highlander. And then they needed a Firefly pinch-hit, “Touch of Silk,” and something sparked, and I’ve never looked back.

DD: What’s your biggest challenge as a moderator?

For me, the move to AO3 has made the technical side of Yuletide much simpler—at least for me. I’m so grateful to the archive for housing us. The one challenge that has remained consistent is trying to deal diplomatically and serenely with the people who complain. There are always people who forget that we’re dealing with nearly 2000 of them, at this point, and often by the time Yuletide is done I’m ready to throw up my hands and quit. However, I do know that the people who complain and are unhappy are a very small fraction of the whole; most people are extremely kind and generous. Largely I bask in the happiness that Yuletide generates, and it makes it all worth it.

DD: Fans have brought an unprecedented level of independent organization to Yuletide at basically every stage of the process. Why do you think this culture has evolved?

I think this culture is wonderful. Candy exchanges, book exchanges—they’ve taken over the finding of betas [editors]. Creating the pinch-hitters list was THE BEST IDEA I EVER HAD. They are incredible, and have saved my bacon at the last minute more times than I can count. I think it’s developed because here we have this huge pool of intelligent, intensely creative people that are feeding off each other’s energy, doing something they love, and they want to contribute, and make it as shiny as possible.

DD: How do you feel about criticism that Yuletide reccing culture [of recommending fanfic] favors large fandoms?

I think that most people who actively read Yuletide go for those fandoms they know first, regardless of recs; and for those who aren’t actively involved, the recs may feel like the only way to navigate a huge number of stories. Large fandoms are always going to have more people who are familiar with them, and therefore are likely to get more recs.The big recs tend to be for fandoms that are more generally accessible—but I do think that more and more people are trying to recommend [in smaller fandoms].

But the recommendations are both great fun for some people and painful for others. I know the feeling of checking each list as it comes out, and not being on it. But I try to have a sense of proportion; there are thousands of stories coming out, and the whole point is that your recipient may be the only person in the world who wants to read what you wrote!

DD: I’ve read several Yuletide fics over the years that were obviously written to troll their recipients. The one that’s stuck with me was a Sky High story where the author wrote a horrendous, homophobic rant where one character ends up killing the other. How do you deal with those types of authors?

I only deal with them if they’re reported—and I’ve never heard about this one. Oh, the anger! The giftee absolutely has recourse; if it’s reported, I’ll do my best to get them a more suitable story (<3 pinch-hitters), and if they want it, I’ll ban the writer. While there have been multiple instances of getting another/additional story for people, I’ve only been asked to ban an author once, last year.

I think most people either don’t think of it, don’t want to make a fuss, or figure that story is a write-off, but there are hundreds and thousands of others to enjoy. All of these are reasonable responses, to me, but I’m more than happy to follow up if people want.

DD: Tell me about your favorite Yuletide fics.

“Set Thine Heart Toward the Highway” (Little Women) is probably my most successful one and was very satisfying. “Fallen Creatures” (Miracles/Supernatural) was possibly the most satisfying, as it was the most complexly plotted and the longest story I’ve ever written.

My favorite received has to be Dorinda’s “Buried Treasure Racket,” based on The Sting, which is THE MOST AWESOME PIECE OF FANFICTION EVER OMG.  I love that story with an unholy love. It’s subtle and sophisticated, the writing is outstanding, and the characterization is fantastic. I was also blown away by “Peter in Love” [by Tosca], a [Chronicles of] Narnia story from the very first Yuletide. It hit me hard when I was at a particular point in my own spiritual journey.

DD: Yuletide prediction for this year as to what fandoms will be the hottest?

Oh, good question! I’d say that Downton Abbey, Grimm, Revenge, and for an old one, Deep Space Nine, will all do well. Yami no Matsuei is back in, and I expect that’ll be a hit. I hope Haven and Person of Interest do well! And Common Law may.

As for fandoms that are new this year, Magic Mike may do really well, and maybe Snow White and the Huntsman. Copper? Arrow? Elementary?

Getting to be a part of something that brings so many different types of fans together, and makes so many so happy. It’s probably my major link to fandom, at this point. The great thing about Yuletide, to me, is how incredibly creative it shows us to be. Every year there are new types of fandom sources that bend the brain! Websites! Anthropomorfic! Paintings! Movie concepts! And every year someone blows me away composing songs for their participants, artworks, embedding “newspaper” articles; designing a story that starts out looking like an old pulp novel for Spy vs. Spy; creating an entire interactive adventure! I don’t think there’s any limit.

Disclosure: The author of this article is a longtime Yuletide participant and a staff member of the Organization for Transformative Works, which operates the Archive of Our Own, where Yuletide is currently housed.