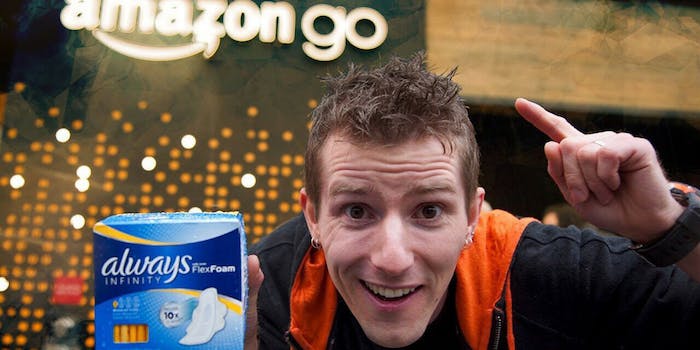 Also a big deal to YouTuber dude: Buying these products in the first place.

There’s been a lot of hype about Amazon’s new cashier-less Go Store: Some people are making fun of the long lines to enter the store, while others are pondering the store’s “honesty policy,” which seems to make it pretty easy to shoplift.

So Canadian YouTube personality Linus Sebastian decided to make the drive to Seattle to try out the new technology and give a review on his channel “Linus Tech Tips.” Sebastian angles his review around the plot that he’s a man with a significant other who just started her period and needs tampons. Because apparently buying tampons in public is too emasculating, Sebastian said the Amazon Go Store is the perfect place for a man to do this totally embarrassing shopping.

“Picture this, your SO’s got a feminine-hygiene emergency and cannot leave the house to get her own bio-waste-management products. So it’s on you,” he said at the beginning of the video. “But you do not feel like going to the local grocery store and listening to the cashier making that stale joke about your ‘Aunt Flo.’”

Wow, life is so hard for feminist men.

Five minutes into the video, Sebastian finally gets to the part of the store that has feminine hygiene products. The store has two options—Always brand pads and Tampax Pearl tampons—and unsurprisingly, he makes the wrong choice: He picks up the pads.

For three-quarters of the video, Sebastian refers to the pads as tampons. Once he does realize he’s got pads, it doesn’t seem to register to him that pads and tampons are not the same thing.

Women on the internet find this video hilarious—but also a great example of how the tech industry fails at accurately marketing to women because they don’t care enough to pay attention to the details.

Because we are tired of poorly done targeted advertising

FYI non-menstruators: tampons are things you insert. These have wings, bro. https://t.co/sejxcM5JQA

nothing quite says "I'm in tech" like stealing a box of pads and calling them tampons https://t.co/4fA2Y9HNyy

“If I come back without these I’m going to get in all sorts of trouble,” he said a few seconds later in the video.

Men, let’s be very clear: For many women, coming home with pads instead of tampons is just as bad as coming home with nothing at all. Then again, having a boyfriend who makes a big viral deal about the whole thing might just be the worst scenario of all.