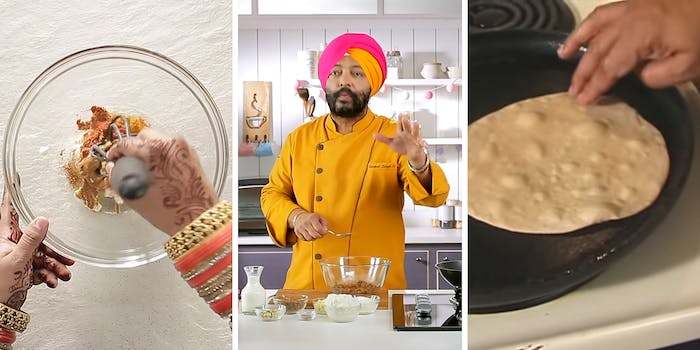 How I learned about my Indian culture through YouTube cooking tutorials

Food connected me back to my roots—and my mother.

I was in my second year of university, living in an apartment off-campus, when I realized, much to my dismay, that my mother was right: I missed her dal-roti-sabzi. When that first craving hit, I went to the local Indian joint looking for the staple of lentils-flatbread-veggies. Disappointed to find that it only had Mughlai on the menu—rich curries, the sort of Indian food one finds outside India—I headed to the grocery store. I was convinced that, having routinely seen my mother prepare meals, I’d manage to make dal-roti-sabzi myself.

While I could cook a solid handful of Italian and Mexican dishes, thanks to my multicultural roommates, my first attempt at the most rudimentary home-cooked Indian meal was a flop. My dal, which was supposed to be melt-in-your-mouth yellow lentils, was undercooked because I didn’t have a pressure cooker. My rotis, the typical flatbread accompaniment to all home-cooked meals, were leathery and all but round in shape (I used a wine bottle instead of a rolling pin). And the sabzi, a spiced dish made with cauliflower, was, well, missing something.

Still, I was now a “grown up,” too proud to ask my mother for help and convinced that my tools (rather than my abilities or lack thereof) were what failed me. So I scoured the internet for recipes until I settled on a handful of videos. I would learn about my culture the new-fashioned way—through YouTube.

Having gone to British schools in the UAE, I felt noticeably different from my peers growing up. And while there were other kids like me—expat brats whose parents had moved from developing countries for a better life—the vast majority of my classmates were white or people of color who’d been born and bred in either the expat bubble or the U.K. I was in-between: an Indian kid with an accent that needed to change (and it did, fast) and who didn’t fit into either box.

The possibility of making a box of my own didn’t occur to me, so as a preteen wanting to be liked and not scrutinized, I did the one thing that made sense: I distanced myself from my Indianness as much as possible. I wore extra-strength deodorant because “Indian people always smell,” spoke in a British accent because all Indian people “sound like Apu,” and I never brought “pungent” Indian food to school.

At home, though, Mum was adamant that one meal a day had to be Indian. She would have a hot Indian lunch on the table waiting for my sister and me when we would come home from school, alongside an extensive list of questions that forced us to talk about our respective days. I was not into any of it. I threw tantrums, dramatically accusing her of sabotaging whatever diet I was on at the time and complained about how we were forced to eat Indian. My huffy episodes crescendoed as I neared my last year of school. Eventually, Mum gave in and took to preparing my favorite (non-Indian) dishes before I moved to Montreal for university.

Many Indian mothers share this stereotypical quality of showing their love for their children through food. Just like many Indian daughters accept this currency, but in silence.

My first YouTube teacher was an elderly Indian lady named Manjula. In India, she’d have been the quintessential aunty: the neighbor who cooked entirely vegetarian food and sent delicious homemade sweets—the type who’d be in my grandmother’s “kitty party” circle, a well-to-do and well-meaning housewife with a perpetual but genuine smile that pinched her cheeks.

I clicked on her video of making rotis. In a cramped kitchen that looked not too different from my grandmother’s, she smiled at the camera. Her hair was tied back and her voice soft and kind. She effortlessly kneaded together a tender dough, then let it rest. When she picked it back up, she divided it into four equal sized balls, rolling each one out in three nonchalant swipes with a wooden rolling pin. Then she placed each disc onto a cast iron tawa. I watched them puff into soft rotis.

It looked doable enough. Armed with a rolling pin, a floured surface, and my laptop open to the same video, I went for it. The first roti was oblong but delicious. The second was equally so. The act of rolling out a roti is one of those skills I’d seen my mother, grandmothers, and aunts do with such little effort that it never occurred to me it actually needed practice. After six tries, I finally reached my stride. The trick, I’d found, apart from a well-worked dough, was in the turning of the roti between rolls. With just four quarter-turns I had a round-but-thin, tender roti that ballooned delightfully within seconds of my placing it on the pan.

I was hooked. The next day, I made her aloo gobi recipe. Then her dal in my newly purchased pressure cooker. I was learning, with feverish enthusiasm, that Indian cuisine was far wider than I’d boxed it into. It was nuanced and purposeful. Each different region, I found, had its own version of khichadi, a rice and dal comfort food. And even where the dishes were boastful in technique—like a traditional Hyderabadi biryani, say—they were never wasteful.

I cooked Indian food for days on end, aware but unapologetic for the fact that my Indianness was showing.

By the time Diwali came in late October, I had a group of Indian friends—a first for me—and we decided to host a potluck for all our non-Indian friends. I’d graduated beyond Manjula at that point, having added Harpal Singh and Sanjeev Kapoor, the Indian Jamie Oliver, to my arsenal. I spent hours over the stove, cooking dal and a chicken curry, finishing off with a few tens of rotis and parathas, which I stored in an Indian casserole lined with a cloth napkin—just like my mother had. I was suddenly invigorated by how confident I was; I was knowingly, enthusiastically celebrating my Indianness.

As I added more dishes to my repertoire with time, I learned more about India and being Indian. The YouTubers I’d discovered and absorbed into my cooking, with their quirks, peculiar turns of phrase, and Bollywood references weren’t just my wardrobe to Narnia. They were, to a larger extent, a topic of conversation between my mother and I.

Mum and I started exchanging recipes and Indian pop-culture references. They were some of the few things that connected us. I’d ask her about ‘50s and ‘60s cinema and cult classics like Pakeezah and Sholay in our otherwise obligatory, dull Skype sessions. I’d tell her about a great recipe I happened upon. I’d ask her how she always got her kurkure bhindi—crispy okra—to be so crisp, and she’d tell me about how she always washed, dried, and cut the okra before putting it in a plastic bag and adding rice flour to it before frying.

It felt almost moronic that a thing that should’ve connected my mother and I—being Indian—was something I’d rejected for so long. Our relationship was different, more work, because of it—and because I had to find my way back to my culture, and to her consequently.

When I finally moved back to India at 26, having never lived here as an adult, I had a moment where I questioned my Indianness again. I didn’t sound Indian, and, for someone who’d come “home,” there was a crushing culture shock. Not to mention, according to my colleagues, I wasn’t “really” Indian. That was, until I sat down with a few women from work and opened my lunchbox to reveal dal-roti-sabzi. To them, my meal was suddenly the most Indian thing about me. But unlike when I was in high school, I knew my Indianness was much more complicated and complete than my lunch.