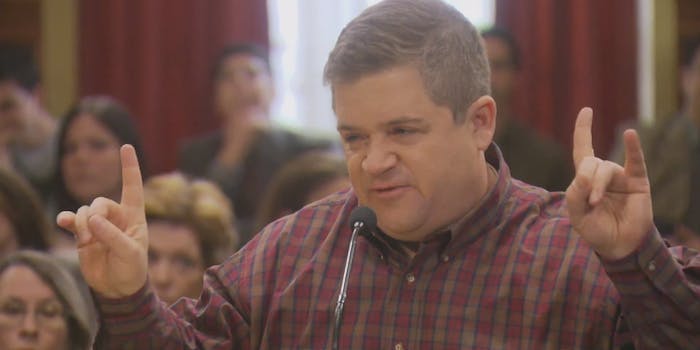 Patton Oswalt has the best ideas for the plot of Star Wars VII.

Patton Oswalt launches a filibuster to prevent a law from being voted on in an upcoming episode of Parks and Recreation, and what follows is a completely improvised proposal for the plot of Star Wars VII that includes almost every other superhero franchise. Your move, J.J. Abrams.

2) The Poke, “The Internet: A Warning From History”

A new documentary looks at the tragedy surrounding the end of the Internet 50 years later. The survivors speak about the time-wasting capabilities and the ultimate end when a number of blind and deaf people cut the power lines at the national grid headquarters.

Someone had the time, patience, and money to set up 10,000 iPhone 5 and knocked them down like dominos in a twisted maze through an office so that they would eventually knock down to a CG visual display.

Jump rope isn’t just for the playground. Devin Graham followed world-record jump roper Adrienn Banhegyi from Cirque de Soleil around Budapest, Hungary as she showed off some of her impressive moves.

5) guyismdotcom, “Learning The Cups Song (With The WHEEL OF TORTURE)”

Ryan Jones is attempting the Cups song from Pitch Perfect, but he isn’t exactly the most coordinated so he plans to punish himself every time he messes up. Between the Bacardi, slaps, kicks, and waterboarding, some covers just aren’t meant to happen.