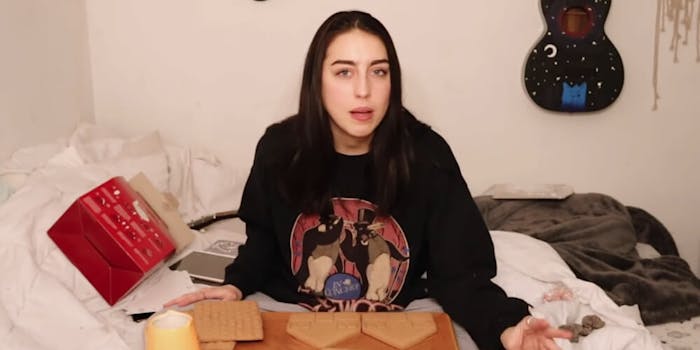 'They were so pressed about that statement. They asked me to explain why I said that.'

Abegael Milot, who goes by Abbe Lucia on YouTube, claims she was recently fired from Starbucks for saying its coffee “tastes like ass” in a vlog.

The 21-year-old, who showed subscribers how to make Starbucks drinks at home in her “by a barista” series, detailed her account of the firing in a Dec. 7 video.

In the video, titled “i got fired from starbucks because of my channel,” Milot claims her coworkers and manager found out about her YouTube channel, and it led to upper management getting involved. Milot says she had to talk to her district manager specifically about one video, in which she says, “Pike roast tastes like ass.” (Pike Place Roast is one of the three staple coffees Starbucks offers.)

“They were so pressed about that statement. They asked me to explain why I said that, and I was like, well… because it do,” she says. “I’m sorry that the coffee tastes bad. Like, do better.”

Milot adds that she isn’t mad at Starbucks and admits they had a right to fire her. But Milot says she is upset about how she was fired.

Starbucks, however, claims Milot was fired for theft. Jory Mendes, senior manager of corporate communications at Starbucks told BuzzFeed News, “this former partner was separated after she admitted to theft, among other reasons.”

When BuzzFeed News reached out to Milot about the theft accusation, Milot said, “No, not at all, that’s a big difference from what I was told.” She did, however, speculate that comments about theft may have been in reference to a previous video, in which she told viewers she took marshmallow syrup from work. Milot told BuzzFeed News she didn’t steal the syrup, she just asked for a side of syrup with her complimentary employee drink.

In her vlog, Milot shared some sage words of advice with her viewers about getting fired.

“At the end of the day, it’s just a job,” Milot says. “I think that everything happens for a reason, so maybe this is good for me. Jobs come and go. I’ll find another one.”