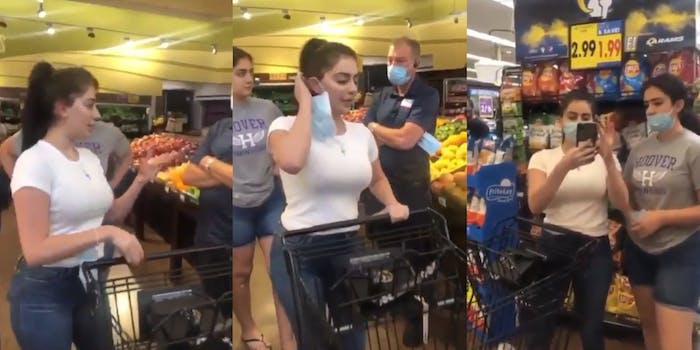 'Take your money somewhere else and put your mask over your nose.'

In a video causing a stir on Reddit, a woman at Ralph’s grocery store in Southern California filmed two arrogant anti-masking “Karens.”

The video joins the anti-masking actions in progress. One of the young Karens poses for the camera phone as if it were a joke. However, a Ralph’s employee tells them that if they don’t don a mask, they will not check out.

Later self-identified at the end of the video as Ashley Gibbs, the woman notes their privilege: “White people thinking they are better than everybody else.” The video has garnered more than 1,500 comments since being posted to Reddit’s “Public Freakout” forum this week.

As he follows them around, she provides a warning: “If you have a grandma in the Glendale area, do not come to Ralph’s market, because these ladies think they can do whatever they want.”

“We have Ralph’s workers, working hard, going home to their families.”

“I don’t want you to kill a loved one,” replies Gibbs.

The woman, pulling the Herculean strength and vigor of all the anti-mask Karen ancestors, retorts: “I don’t want you to tell me what to do.”

However, Gibbs is about that action and remains undeterred in her quest of the public call-out, letting the woman know that Ralph’s employees don’t make much money.

Then Gibbs digs in with more call-out bars: “You obviously haven’t had much hardship in your life. You just come here and think you can disrespect people. Take your money somewhere else and put your mask over your nose.”

When they thought pulling out a phone and filming her was fair play, she identified herself directly and left them with a message: “And I’m letting you know, you need to put the mask over your fucking nose.”

By the end of her sentence, both women had their masks on in the appropriate fashion.