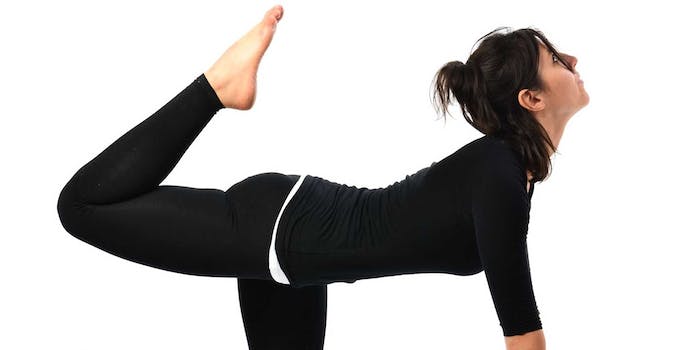 Did this yoga magazine just advocate for bulimia?

The editor says they would never "promote any eating disorders."

At its best, yoga can cure some of the worst physical and mental woes. But when taken to an extreme, like most things, it can be harmful.

A reader of Yoga Magazine wrote to editor and yogi Dr. Malik asking about an ancient yoga technique he read about in an old book. According to the reader, the technique refers to making yourself vomit in order to cleanse yourself. Modern people might recognize this as an eating disorder. 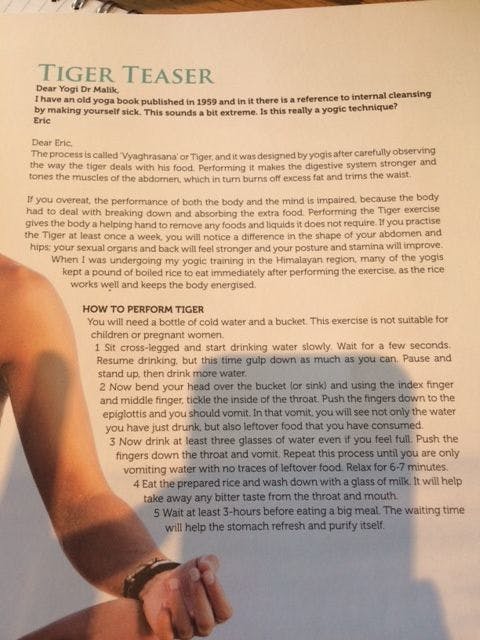 Dr. Malik replied to the query in earnest, detailing the benefits and exact technique used to achieve what he refers to as “vyraghrasana” or Tiger. The name is a reference to the way that a tiger regurgitates his food. And Dr. Malik’s detailed explanation sounds a whole lot like bulimia.

In yoga, an “asana” refers to different postures taken throughout the practice. When you search for “Tiger pose,” most of the results show an actual yoga posture that looks like this: 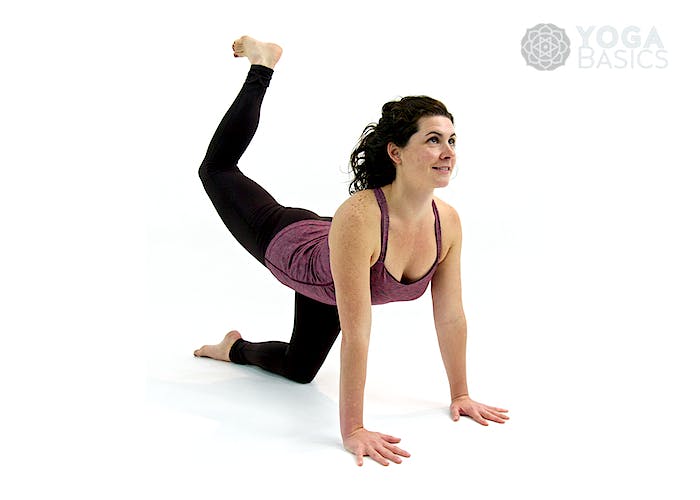 A site called Yoga Basics describes “tiger pose” as a pose that “warms and stretches the back muscles and spine. Tiger pose strengthens the core body and stimulates the nervous, lymphatic and reproductive systems.”From the sounds of it, the pose has the same roots as the controversial technique described by Dr. Malik. A 1977 article in Yoga Magazine (a different publication of the same name) described Vyaghra kriya, another name for the same technique shared in this month’s issue. However, the writer, Dr. Swami Shankardevananda Saraswati, referred to it as “the ideal technique for digestive upsets such as chronic dyspepsia or heartburn, which plague many people in the west.” Not, as Dr. Malik seems to intimate, as a recipe for a six-pack.

Instead of taking a step back and thinking, “Hmm, maybe it does sound like I provided a how-to guide for bulimia,” Dr. Malik took to the publication’s website to defend his piece.

“Firstly, we haven’t, and will never promote any eating disorders in YOGA Magazine,” he wrote. “We were not promoting bulimia, but answering a genuine reader question who had asked whether this exercise that he had found in a textbook dating back to the 1950s was true or not. We decided to answer this question as we felt this was rather interesting, and different to the usual standard questions we receive each month, such as ‘What exercises are good for a bad back?’”

The real kicker is that Dr. Malik feels it would be insensitive to include a disclaimer about how the “Tiger teaser” is not part of a healthy lifestyle and should be used (if at all) with the utmost discretion.

“The journalist who contacted us for a quote made reference to the fact that ‘we provided a caution to pregnant women and children’—as obviously this technique is not safe for these people to perform,” he wrote. “Would it not be extremely insensitive if we added ‘not suitable for anyone suffering from eating disorders?’”

In response to the article, Healthista.com asks: “Has Yoga Magazine, in one fell swoop, validated bulimia, enabling suffers of the eating disorder to rationalize their self-harming in vaguely yogic terms? When really, Vyaghra kriyā, as the 15th Century technique is known in Sanskrit, has absolutely no relevance in contemporary Western yoga practice.”

It’s hard to say if one article in one magazine has that much influence. But it is worth noting that if Dr. Malik’s own biography is any indication, his medical degree is unconfirmed.