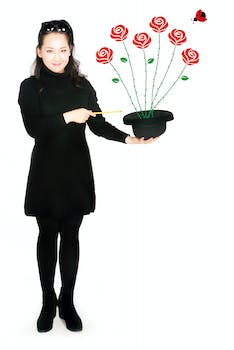 Lu brings her trademark style to SXSW and Walls 360.

For most Twitter users, the Fail Whale image is a source of much frustration, showing up on the site every time it’s down.

But for Yiying Lu, the artist behind the iconic whale, seeing the image has the exact opposite effect.

“At this point, my friends and family all seem to think that the notoriety of the ‘fail whale’ is pretty funny,” said Lu, who, since designing the image in 2008, has won 10 different awards and done work for comedian Conan O’Brien. “The image still makes me smile, and I love the mash-ups of the design that folks have done over the years.”

With her newfound notoriety, in 2010, Lu cofounded Walls 360, a startup that creates premium wall graphics for artists, designers, photographers, and brands. Since then, Lu has sold thousands of installations around the world and recently relocated to Las Vegas. There, the business produces some of its most popular pieces, including video-game wall graphics, panoramic wall murals, and posters.

One of Lu’s most memorable creations are interactive wall tangrams, a series of colorful shapes that can be removed and pasted hundreds of times without marking or damaging walls or losing their stickiness. For every tangram set purchased in January, Walls 360 donated one to the Clark County School District, which serves Las Vegas and its outlying areas.

Here’s how Lu described the Walls 360 production process to the Daily Dot.

“We start with a high-resolution digital image and use the best large-format eight-color digital printers available today to print the graphic onto a unique self-adhesive repositionable fabric material that can actually be removed and reused hundreds of times without leaving a mark or losing adhesion. Walls 360 wall graphics will stick to almost any surface—from walls and windows to ceilings and around corners. … We print all of our wall graphics at exceptionally high resolution, using premium UltraChrome GS digital inks—the same inks used for high-end limited edition artist prints—for optimal colors and vibrancy. Once a sheet or roll of wall graphics is printed, it is transferred to one of our high-resolution plotters/cutters, which read the printed cut-lines on the surface of the material, and the wall graphics are precision contour-cut in the appropriate shapes.”

As busy as Lu has been with Walls 360, she found time this winter to design the official South by Southwest Interactive tote. The inspiration came from her first SXSW experience last year, which she described alternately as exciting, exhausting, and “like one of those whack-a-moles in the children’s carnival game,” as she told SXSW.com.

“My most (in)famous design to date has been the fail whale, so having people walking around with the SXSW Interactive Whack-A-Mole is definitely WAY better!” Lu said. “And an absolute honor.  I can’t wait to be back in Austin.”