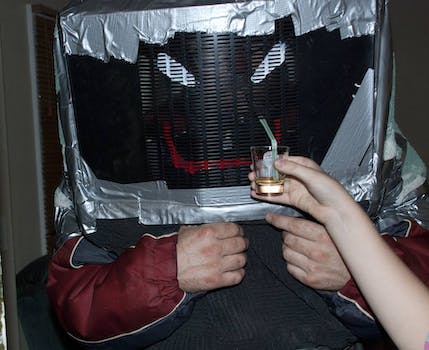 When he stepped out of his home last night, he was armored in duct tape, towels, a heavy coat, and an old computer case he used as a mask. In his left hand he wielded a “cheap-ass” Dirt Devil vacuum; in his right, its hose.

And to steel his body for the task, he downed beer, with a whiskey chaser—no Gatorade or Power Bar for him.

The reason for his unique accoutrement? Yellowjackets. They’d stung his girlfriend. He was out for drunken, vacuuming revenge.

Troy posted photos of the battle to social news site Reddit, where his makeshift yet oddly space-age equipment became a big hit on the site, gathering thousands of upvotes and hitting the front page late last night.

When it was all over, about 80 of the wasps had met their doom at the end of Troy’s vacuum.

But not without their own revenge.

One of the yellowjackets slipped inside his duct-tape protection, buzzing around his drunken head.

Oddly enough, this wasn’t even the first time an insect had snuck into his helmet.

The 41-year-old office manager and bookkeeper (not beekeeper) had some experience keeping actual bees about twenty years ago.

“A bee got inside my veil and stung the shit out of me,” TroyPDX wrote about that experience in a message to the Daily Dot. “I vividly remember the sound of the buzzing right in my ear and realizing it was inside the veil . . . you know you’re going to get it.”

So this time, in his homemade suit, Troy panicked. He took a bottle of bug spray, pointed it at his face, and let loose. “That stuff is really unpleasant,” he wrote. He survived.

But, unfortunately, he said, the wasps won. He didn’t terminate them all.

The next morning, hung over, throat torn up by bug spray, and unhappy about his defeat, Troy checked Reddit. He was delighted by the response.

“That was really cool,” Troy told the Daily Dot. “Something went from being a failure to being something that made a lot of people I’ll never meet smile and laugh. And I don’t mind that I’m a bit of the clown in this scenario, my self-esteem can handle that.”

What made it even better, Troy said, was that the Reddit community responded the way it knows best: image memes.

One of the images took a photogrpah of Troy in his bee suit and turned it into a mockup of a 1970s-era grindhouse horror movie.

Its tagline? “When one of those bastards stung his girlfriend it was on like Donkey Kong.”

That was Troy’s favorite. He’s already printed it out and hung it on his wall. Image via TroyPDX