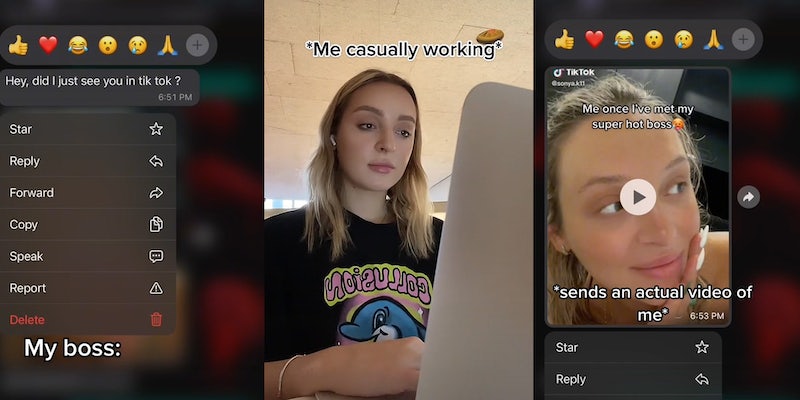 ‘Wattpad vibes’: After boss sees worker’s TikTok about her ‘hot boss,’ he puts a meeting on her calendar

Having a work crush can make for awkward interactions. It can get even more awkward if you post about your hot boss on social media and they catch you, which seems to have happened to a woman on TikTok.

The video series, posted on the brand account for @viou_app, details a series of interactions between the worker and her boss after he found her personal TikTok, @sonya.k11, and messaged her a link asking if it was her in the video.

The text chain opens with her boss asking, “Hey, did I just see you on TikTok?”

Sonya responds, “Hi, what do you mean?”

Her boss links to the girls’ TikTok account and writes, “Isn’t that you?”

She replies, “I’m sorry, it was a joke,” and promises to delete the clip.

The video then shows a screencap of a scheduled meeting between both parties titled “Bi-weekly catch-up Sonya, Vici, Manos.” The video on her personal page has since been deleted.

In a series of follow-up videos, she notes she wasn’t fired. Rather, she and her boss seemed to have gone on a lunch date for sushi.

The latest update, posted yesterday, suggests the boss is now on a business trip while the girl is still working at the office. However, this does not seem to be the end of this saga, judging by the caption which notes “He’ll come back later this week and we’ll see how it goes.”

The original TikTok was posted on July 25 and now has over 7.1 million views, with commenters debating on how Sonya should’ve responded.

Another wrote, “shouldve told him you were talking about your past boss.”

A third added, “you could have said it was my twin sister.”

The Daily Dot has reached out to both @viou_app and @sonya.k11 via TikTok comment.