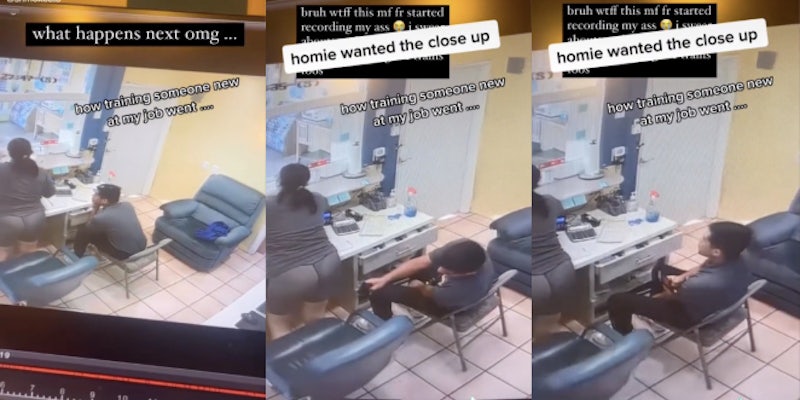 ‘Boi got fired on his first day’: Worker tries to train new employee. He starts taking photos of her butt

'Imagine being shown this while getting fired.'

According to a 2018 survey from Pew Research, about 40% of women and 16% of men say that they’ve been sexually harassed in a work or professional environment. As an article in Harvard Business Review notes, this number has largely not changed since the 1980s.

A user on TikTok went viral after showing how one such case of sexual harassment played out.

In a video with over 5.6 million views, TikTok user Elo (@shmokeelo) shows a recording of security camera footage. At the start of the video, a woman stands up next to a man, who is seated. Elo identifies the man as a “new employee.”

After the woman is standing for a couple of seconds, the new employee moves his phone over and appears to take a photo or video of the woman’s butt.

“I honestly wonder wha[t] in his head told him this was okay,” Elo wrote in the caption.

In the comments section, users remarked upon the events on display in the video.

“Nah bc the level of boldness to to this and to be so close too,” one user wrote.

“Imagine being shown this while getting fired,” another added.

“Dude I was surprised when he even looked up close. Then he pulled the phone out,” offered a third. “I feel like a creep just taking a quick glance…”

While some commenters made victim-blaming remarks about Elo’s attire, Elo was quick to shut one down.

“Don’t matter wha i wear,” she wrote. “still doesn’t give him the right to harass a female like that!”

“Work is also w[h]ere your suppose[d] to be safe and not harrassed either,” agreed another.

The Daily Dot reached out to Elo via Instagram DM.