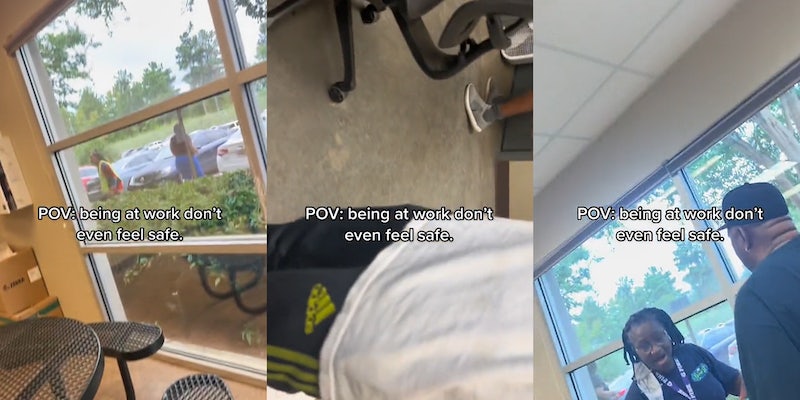 ‘Somebody put me on to a at HOME JOB’: Worker records shots fired at warehouse, sparking discussion about workplace safety

'This is why I be at work looking for an escape plan.'

A video showing a shooting at a McDonough, Georgia warehouse has gone viral after being shared to TikTok.

In the video, one can see and hear employees running away from the gunshots. The poster of the video, Kira (@kira2nasty), questions whether the person with the gun is “Jasmine.”

The video currently has over 7.3 million views.

“POV: Being at work don’t even feel safe,” Kira wrote in the clip’s text overlay.

@kira2nasty somebody put me on to a at HOME JOB !!! Working here is ghetto 😬😬 #fyp #AEJeansSoundOn ♬ original sound – Kira2nasty

The video captures an incident that occurred on Aug. 25 in which someone entered a warehouse and began shooting. According to local affiliate Fox 5, three people were shot during the incident, though all are expected to recover.

The cause of the incident is unclear, though police speculate that the shooting may have resulted from a dispute. Some people related to employees agree.

“This girl, some dispute with this girl and boy, and the girl called her boyfriend, and her boyfriend came up there, and my son was outside in a lunch break with other friends, and the boy just clocked his gun to shoot at his friends and that’s when he shot the other people,” Myra Dunn, the mother of someone who works at the business, told Fox 5.

However, if there is a jealous man involved in this story, the police have not yet announced it. Instead, police announced that they had arrested a suspect, 23-year-old Jasmine Hollis. Hollis has been charged with three counts of aggravated assault.

In a follow-up video, Kira says she used to work with Jasmine.

Commenters supported Kira, though many questioned her choice to go deeper into the warehouse rather than leaving the building.

“I woulda found a way to my car and went HOME,” wrote one user.

“Yea ion know what y’all was doin, i woulda been headed to my car,” added a second.

“I know y’all was scare but y’all ain’t got no survival instincts.. just loud af like HEY WE OVER HERE,” shared a third.

However, according to Kira, leaving wasn’t possible.

“They wasn’t letting us leave at all,” she wrote. “we was trapped in basically.”

Others commented on the need for safety plans in case of a shooting at their own workplaces.

“This is why I be at work looking for an escape plan,” one viewer said.

Above all, users said that Kira deserves more for dealing with what she went through.

As one user wrote, “Wow. PAID sick leave due to severe emotional distress me please!”

The Daily Dot reached out Kira via TikTok comment and the Henry County Police Department via email.