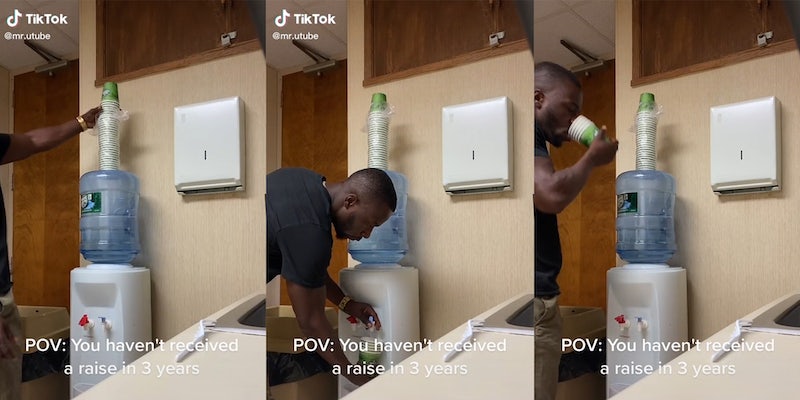 ‘Don’t forget your extra well-deserved breaks’: Worker jokes about how he evens the score after not receiving raise for 3 years

‘I stole like 5 months of toilet paper and paper towels.’

According to Investopedia, the average raise year over year that employers give workers is just 3%—only slightly above the rate of inflation.

However, some employees don’t receive raises at all. In a poll conducted by job posting site Monster, “18% of respondents have never received a raise…and slightly more than 26% of pollsters haven’t received a raise in over one year.”

With inflation, that means that, in practical terms, these employees are actually making less money year over year.

This can understandably leave employees feeling a little annoyed—and encourage them to take revenge.

One user on TikTok recently went viral after making a joke on the topic. In a video posted by user @mr.utube, he takes a stack of paper cups for a drink and a handful of paper towels to dry his hands.

“POV: You haven’t received a raise in 3 years,” he wrote in the text overlaying the video. The TikTok currently has over 1.1 million views.

In the comments section, users shared their own stories of petty revenge for less-than-adequate wage increases.

“I stole like 5 months of toilet paper and paper towels right before the pandemic,” confessed one user.

“Be in the employee fridge like ‘damn what did cheryl pack us for lunch today,’” joked another.

Others said that three years without a raise was far too many.

“If I havent recieved a raise within a year of working somewhere I automatically start looking for better opportunities,” explained one user. “Never settle bro.”

Further commenters stressed the importance of asking for raises, not simply waiting for them.

“Say, ‘I’d like to have a discussion about my salary,’” advised a user. “Just be polite. what’s the worst that can happen? no one will fire you for asking for a raise…and.. definitely have some reasons ready for why you deserve a raise (besides inflation and rising prices all around us). like how u made a difference.”