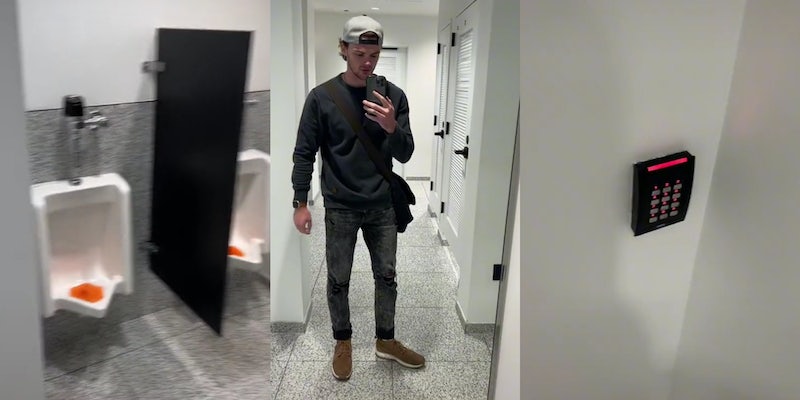 ‘Who puts a lock to keep people from getting out?’: New employee gets trapped in office bathroom that requires a key card to exit

'I will never be going in that bathroom again.'

Podcaster/TikToker Jackson Ammons (@onairjackson1) went viral after uploading a video of himself stuck in a real-life sitcom scenario—he was locked in his office’s bathroom on his first day of training at the new position.

To make matters even worse, he says the majority of employees at his new job work from home on Fridays, meaning that the chances of someone walking into the bathroom and giving him a chance to escape were slim.

However, the most perplexing part of the video was the fact that restroom visitors needed a keycard with proper clearance to exit. Ammons didn’t have one, because he just started working there.

People had several questions and wanted to know exactly how he landed himself in such a predicament, and Jackson obliged their requests in a follow-up clip. He did make it out of the bathroom.

During his first day on the job, Ammons explains that the co-worker training him took him to the building and had the key card he “so desperately needed.”

“We’re there, doing the training, we get to a point where I’m just downloading stuff on my computer, waiting for it to be done,” he recalls. “I don’t want to waste any more of his time. I tell him, ‘go ahead, get the hell outta here, I know where the door is. We’re good to go.’ So he does. He leaves me there. That’s fine. It should’ve been fine. Everything should’ve been fine. But it was most certainly not.”

Before leaving, Ammons says he went to the bathroom, that’s where he ran into an issue. “There’s a keypad in there that traps me,” he says. “I’m prisoner forever…not really.”

He notes that the bathroom had another “exit” door, however, it only led to several other rooms that also needed key cards to escape. In lieu of a key card, Ammons texted and called his co-worker hoping to access a number to punch into the keypad. However, he didn’t answer.

“I could’ve texted my new boss, but I didn’t want her to know she hired an idiot if that makes any sense,” he says. “Yeah, we just sat in the bathroom. We waited. I downloaded Doodle Jump again. That was fun. Got Temple Run, amazing. Fruit Ninja, forgot that was even an app. And I did have my Pop-Tarts, thankfully, I had packed and not eaten yet, so I wasn’t going hungry.”

Eventually, Ammons says he received a response from his co-worker giving him his key to freedom. He concluded his follow-up clip by stating, “I’m excited to go back to work but I will never be going in that bathroom again.”

Despite his explanation, several viewers questioned the intentional design choice to require a key card to leave the bathroom.

“I mean honestly this isn’t on him,” one user said. “Who puts a lock to keep people from getting out? I’d be making fun of the company on that one.”

“But why was a code needed in the first place? that is what I am stuck on,” another added.

“Glad to hear you made it out! I’ve never heard of a bathroom you need a card or code to get out of. Any idea why?” a third asked.

One user claimed this was exactly the kind of story that becomes infamous in a workplace—the type of myth that sticks with an employee’s reputation moving forward. “You will forever be the new employee who got locked IN the bathroom that they talk about at every orientation from now on,” they joked.

Others argued that the design posed a serious safety risk for those in the building.

“you should probably contact the fire marshal that’s highly illegal,” another said.

“No bc how does this pass fire code?” a third questioned.